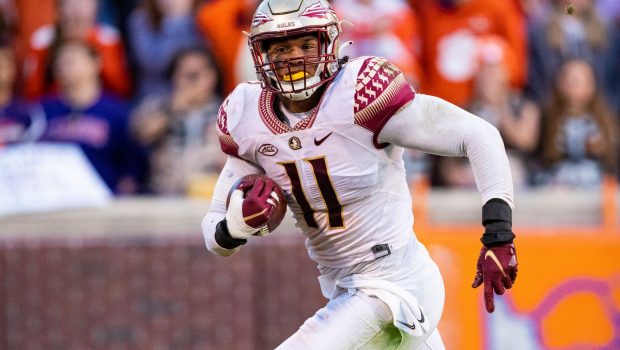 The NFL draft is sooner than you think.

And the Eagles have three picks in the first round.

Pick 15: Jermaine Johnson, DE, Florida State (above): The Eagles haven’t been super active in free agency, though they did add impact edge rusher Haason Reddick and bring back defensive tackle Fletcher Cox. I don’t think any of their needs have changed since my last mock draft. I’m looking at wide receiver, cornerback, safety, off-ball linebacker and defensive end — yes, they still need one — to fill out their three first-round picks.

That leads me to Johnson, a one-year starter who transferred from Georgia to FSU and had a stellar 2021 season. He was excellent at the Senior Bowl and has moved from a possible top-50 pick to likely landing in the top 20. NFL teams always want pass-rushers, and he could help immediately.

Pick 16: Chris Olave, WR, Ohio State: Olave can play early and often for a Philadelphia team that has to get more out of its passing game with quarterback Jalen Hurts. Olave is a speedster (4.39 40-yard dash at the combine) who had 13 touchdowns last season. This would be the Eagles’ third straight draft taking a wideout in Round 1, but it should be a priority if they want to get back to the playoffs.

Pick 19: Devin Lloyd, LB, Utah: Here’s a spot to fill Philadelphia’s void at off-ball linebacker. Lloyd was one of the best all-around defenders in college football last season, racking up 111 total tackles, eight sacks, 20 tackles for loss, four interceptions and a forced fumble. He has some juice as a blitzer and can cover tight ends and running backs in the passing game. Lloyd’s 4.66 40-yard dash at the combine means he doesn’t have the straight-line speed of former top-five pick Devin White (a linebacker I’ve compared him to), but I don’t think he should drop past the Eagles.