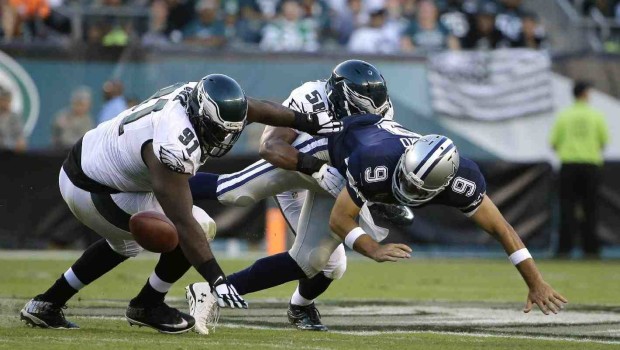 EAGLES WILL GET CHANCE TO FEAST ON COWBOYS’ ROMO, ESPN SAYS!

The Cowboys reportedly have changed course and are planning to get some playing time for quarterback Tony Romo before the regular season ends.

Romo is expected to play in Sunday’s regular season finale against the Eagles at the Linc, according to a report by ESPN.

Cowboys owner Jerry Jones previously had said the risks to playing Romo outweighed any benefit to getting him into a game to improve his sharpness in case he’s needed during the postseason.

Romo has not played all season after suffering a preseason back injury that gave an opportunity to rookie quarterback Dak Prescott.

Prescott has led the Cowboys to a 13-2 record. They have clinched the top seed in the NFC playoffs and thus have nothing at stake against the Eagles. They will have an opening-round postseason bye and then will host an NFC semifinal on the second weekend of the playoffs.

Cowboys' QB Tony Romo is expected to play Sunday vs Eagles for the first time since Thanksgiving 2015, sources tell @toddarcher and me.