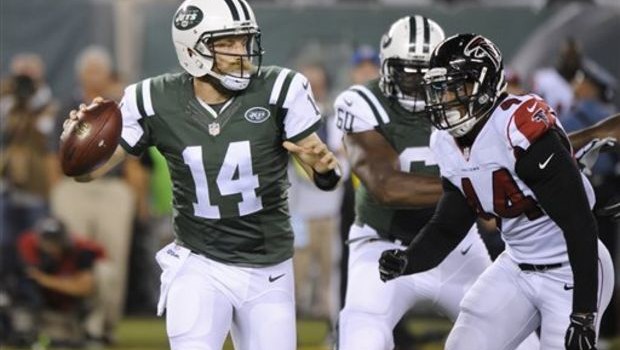 When the Eagles’ defense takes the field at the Meadowlands to face the New York Jets next Sunday, guess who will be the quarterback:

None other than 32-year-old Ryan Fitzpatrick, an 11-year NFL vet who played his college ball at Harvard!

And on Tuesday, Jets coach Todd Bowles confirmed that Fitzpatrick will remain his QB even after Geno Smith returns.

The confirmation is hardly a shock. Smith’s standing within the organization took a permanent hit when he was slugged in the jaw by former teammateIK Enemkpali, the culmination of a lingering dispute over $600. The ensuing controversy could have sunk the Jets’ season before it started, but Fitzpatrick has proved to be a steadying force in the locker room and on the field.

Smith — who underwent surgery to repair a fractured jaw last month — is believed to be two or three weeks away from a return. Expect Smith to be the team’s primary backup, with rookie Bryce Petty remaining in a developmental role.

Fitzpatrick has done a quality job over two starts, completing 37 of 58 passes (63.8 percent) for 423 yards, four touchdowns and two interceptions. He has been sacked just once and has an above-average passer rating of 94.3.

Things can change in a hurry in the NFL, and Fitzpatrick has been known to go into turnover-rich slumps in his first 10 seasons. Still, don’t be stunned if Geno Smith never plays another meaningful snap for the Jets.