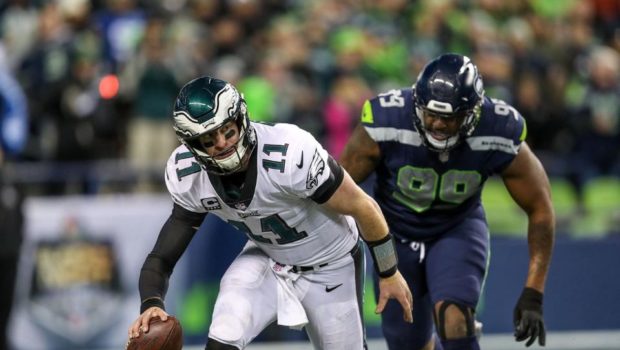 EAGLES WILL ERASE LAST SUNDAY’S TURD IN THE PUNCHBOWL PERFORMANCE TODAY AGAINST THE RAMS!

Sunday has arrived, and the Eagles finally have a chance to erase the memory of last week’s turd in the punchbowl performance in Seattle.

KEYS TO THE GAME: The Eagles and Rams have both scored 361 points, an average of 30.1 per game, so to say this is shaping up as an offensive show is an understatement.

Rams quarterback Jared Goff is enjoying a breakthrough second season and avenging the early assessment of him as a bust while throwing for 3,184 yards, 20 touchdowns and just eight interceptions.

Eagles quarterback Carson Wentz, who was drafted second to Goff’s No. 1 in the 2016 draft, has quickly emerged as one of the best young quarterbacks in the game while throwing for 3,009 yards, 29 touchdowns and six interceptions.

The Rams will likely follow the same blueprint they used to beat the Saints two weeks ago: Be very aggressive early through the air to try to take immediate control of the scoreboard. The goal is to get at least two scores up on the Eagles, then nurture that cushion throughout. That requires ball management, efficiency and the defense stepping up to make a timely stop or two to help create that cushion.

The Rams have an excellent pass defense, including one of the league’s top pass rushes, but they have struggled against the run. The Eagles are second in the league in rushing. Their running back-by-committee — Jay Ajayi,LeGarrette Blount and Corey Clement — will get a lot of opportunities early.

Rams G Jamon Brown vs. Eagles DT Fletcher Cox. Brown began the season as a question mark, but he has developed into a steady player with intelligence, toughness and athletic ability. He will be tested by Cox, who is a beast in the middle of the Philadelphia defense.

Eagles WR Alshon Jeffery vs. Rams CBs Trumaine Johnson and Kayvon Webster. Jeffery has seven touchdown catches, five in the red zone. Johnson and Webster have given up a combined one touchdown this season.

PLAYER SPOTLIGHT: Rams DT Michael Brockers. The sixth-year pro has started 86 of 87 career games and leads all Rams defensive linemen with 57 tackles, including 38 solo stops, seven tackles for a loss, three sacks and three passes defensed. With the Eagles paying particular attention to Aaron Donald, keep an eye on Brockers having a big game in the middle of the Rams’ defensive front.

FAST FACTS: Philadelphia can win the NFC East with a win or tie or if Dallas loses or ties. … Eagles QB Carson Wentz needs four TD passes to surpass Sonny Jurgensen (32 in 1961) for most in a season in team history. … Eagles TE Zach Ertz is tied for second among NFL TEs with seven TDs and ranks fourth with 57 receptions and 663 receiving yards. He has six TD catches in his past seven games. … Eagles DE Derek Barnett is tied for the lead among NFC rookies with five sacks. He has three sacks and a forced fumble in past three on the road. … Eagles CB Patrick Robinson is tied for third in the NFC with 13 passes defensed. … The Rams can clinch a playoff berth with a win, if (1) Carolina and Atlanta both lose and (2) Detroit, Green Bay and Dallas all lose or tie. … Rams QB Jared Goff aims for a third game in a row at home with 300 passing yards and at least two TDs. … Rams RB Todd Gurley leads the NFC with 1,502 scrimmage yards and is tied for first with 11 TDs. … Rams WR Cooper Kupp leads all NFL rookies in receiving yards (665) and is tied for third in receptions (51). … Rams DT Aaron Donald had two sacks in Week 13. He has 36 sacks since 2014, most by an NFL DT. … Rams LB Mark Barron leads the team with 78 tackles.

PREDICTION: It’s a rough back-to-back for the Eagles, at Seattle and then L.A., but Wentz is better than Goff and the Eagles will be able to run against the Rams.