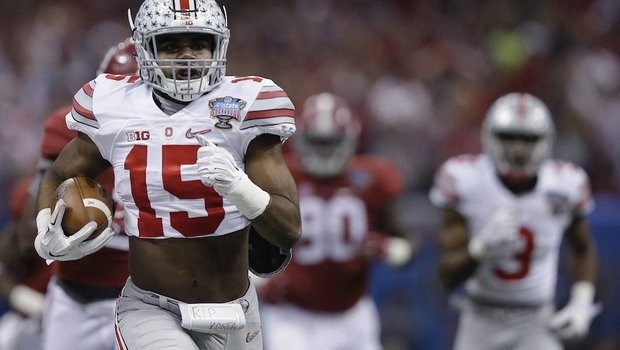 Don’t look now, but there is a consensus building among NFL “experts” that the Eagles will choose Ohio State running back Ezekiel Elliott with the No. 8 pick in next month’s draft:

“Elliott gives the Eagles an instant bell-cow back and replacement for DeMarco Murray. He can take pressure off of Sam Bradford and the passing attack.”

“Word is the Eagles are shopping Ryan Mathews, and they already traded DeMarco Murray. It would make sense for the team to look for a new bell-cow back.” –– Chad Reuter, NFL.com

“When this mock first went live, a few hours before the Eagles-Dolphins trade was confirmed, I had Elliott slotted in at 13 but said it was too low for his talent level. This is better, in terms of the 2016 draft class. The Ohio State star is a legit three-down stud. If the Eagles sign a running back … there are three other options to be addressed: quarterback, offensive line and the secondary. Any would make sense, especially if Wentz slips a bit.”

“The Eagles have been very active with trades, signing their own players, and attacking free agency. Elliott would be a solid piece to this offense, especially if they trade Ryan Matthews.”