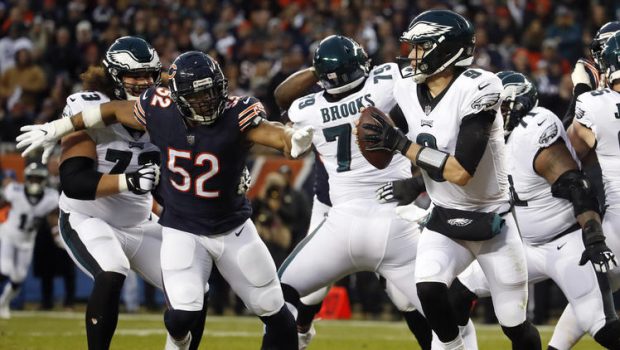 Despite their struggles, the Bears still have a nasty pass-rushing group.

Khalil Mack is a monster, and they have plenty of supplementary players to go along with him.

The coverage behind that Chicago front seven is also strong, making quarterbacks hold the ball too long and absorb sacks.

If the Eagles want to move the ball more effectively than they did in their playoff matchup with the Bears last season, Carson Wentz has to have a clean pocket.

The Eagles have allowed just around league average when it comes to sacks, and that won’t cut it against the Bears.

Right tackle Lane Johnson will probably draw Mack for most of the day, with help from tight ends Dallas Goedert and Zach Ertz.

If Mack lines up against fill-in tackle Andre Dillard, the Eagles must provide help.

Leaving Mack against a rookie like Dillard is the definition of a recipe for disaster.