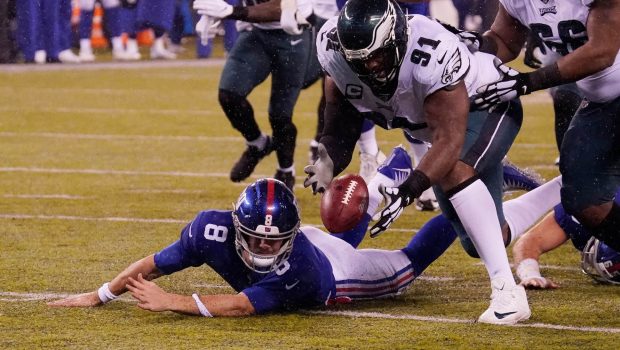 EAGLES WILL BEAT GIANTS, BUT WILL THEY COVER THE 4 1/2?

The battered and reeling Eagles turn it around quickly after Sunday’s loss to the Ravens tomorrow night at the Linc on TNF:

Once again this week, all of the Eagles’ injury concerns on offense have caused the early money to go against Philly, moving this line down to 3.5 at some betting sites as of Monday night. There’s also been a sharp move to the UNDER, driving the total down to 44 at the time of writing.

As of this morning the public has moved the line up to 4 1/2.

Joe Judge got his first victory as an NFL head coach last week, but it wasn’t easy. New York was outgained 337-240 in yards and 24-16 in first downs, let an early 10-0 lead slip away and needed to stop a two-point conversion with 36 seconds left to edge Washington 20-19. QB Daniel Jones threw for only 112 yards and tossed his sixth interception against just three touchdowns on the campaign.

Now the challenge is to string consecutive wins together, something the Giants have struggled to do over the past few years. New York is 4-9 SU and 5-8 ATS in its last 13 games following a victory. The G-Men have also lost 13 straight as an underdog, are 0-6 ATS in their last six road games and have lost eight of their last nine prime-time contests.

The Giants could be thin at receiver Thursday as C.J. Board (concussion) and Darius Slayton (foot) were listed on New York’s injury report. Slayton has caught all three of Jones’ touchdown passes this year and leads New York with 406 receiving yards, while Board is averaging 9.4 yards per catch.

How banged up are the Eagles on offense? Well, when the final gun sounded in the 30-28 loss to Baltimore, QB Carson Wentz and center Jason Kelce were the only remaining healthy players at the top of Philly’s depth chart.

The Eagles’ infirmary got even more crowded as they lost running back Miles Sanders (knee) and tight end Zach Ertz (ankle) to injuries that will keep both out for multiple weeks.

Even without Sanders and Ertz, Wentz nearly found a way to lead the Eagles back from a 24-6 fourth-quarter deficit. The beleaguered quarterback threw TD passes to Jason Croom and Travis Fulgham, then added a one-yard scoring run before the comeback fell just short on a failed two-point conversion with 1:55 left on the clock. The late rally sent the game soaring OVER the total of 46.5, just the second time the Eagles have gone OVER in their last 10 home games.

Boston Scott could be a good value play this week in fantasy if he replaces Sanders as the Eagles’ featured back. Scott, the only other running back to carry the ball for the Eagles on Sunday, ran for four touchdowns in two games against the Giants last season.

The Giants don’t have to travel far for this one, but the home team should still enjoy an edge in preparation on a short week. New York may also be emotionally flat after finally earning its first victory of the season on Sunday.

One thought on “EAGLES WILL BEAT GIANTS, BUT WILL THEY COVER THE 4 1/2?”