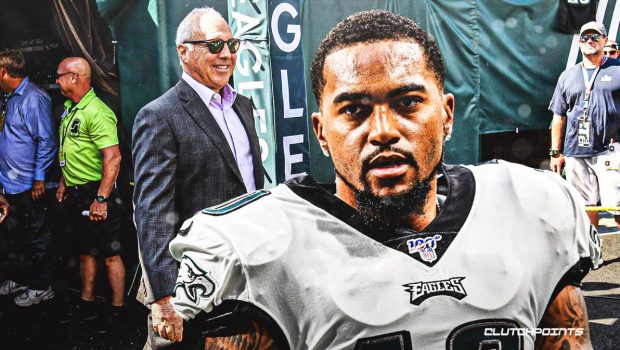 EAGLES WILL BE PINCHED IN 2021 BY INCREDIBLE, SHRINKING CAP!

The Eagles vets are due in training camp on Tuesday, thanks to yesterday’s agreement between the NFL and NFLPA.

But there is an uncredible shrinking feeling when it comes to 2021.

The salary cap usually grows each year. Next year, it’s expected to shrink. And some teams are going to feel the pinch.

Yesterday’s agreement guarantees that the salary cap won’t drop any lower than $175 million, but even that represents a significant drop from this year’s $198.2 million cap. Until a few months ago, most teams were expecting the 2021 cap to grow to somewhere in the neighborhood of $215 million, which means teams have $40 million less to spend next year than they were planning for when they were negotiating many of their players’ long-term contracts.

According to OverTheCap.com, eight teams are already over a 2021 cap of $175 million with the players they have signed through next year, before they sign a single free agent next year or draft any rookies. That group includes the Eagles, Saints, Falcons, Chiefs, Steelers, Bears, Raiders and Vikings.

Those teams will have to cut players and restructure contracts just to get under the cap before the start of the league year. Teams cut players and restructure contracts every year, but next year it will prove to be particularly difficult for teams that had a lot of players under long-term contracts that were negotiated before anyone dreamed that a pandemic would cause the cap to plummet.

It’s still possible that the cap won’t shrink as much as everyone expects. New revenue is coming this year from additional playoff games, and the NFL and NFLPA may reach further agreements that keep the cap from dropping as much as expected. But right now, some teams have to be concerned about the salary cap crunch they’re facing in 2021.