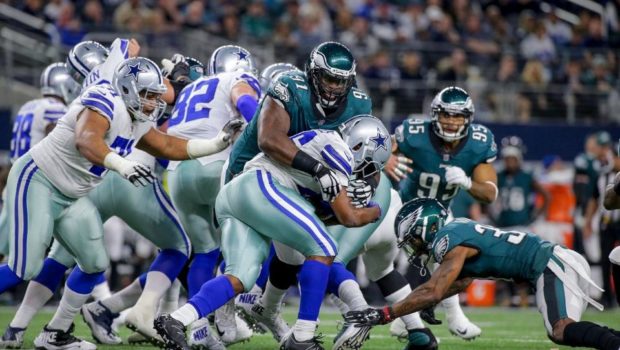 EAGLES HAVE WHIP HAND IN NFC, STEELERS TIED IN AFC!

Tonight’s Seahawks-Falcons is yet to be played, but here’s the state of play for the postseason in the NFL:

1. EAGLES (9-1): NFC East leader. They’ve essentially wrapped up the division after embarrassing the Dallas Cowboys. Philly now has a four-game bulge with six left to play and is 4-0 against NFC East competition.

2. Minnesota Vikings (8-2): NFC North leader. Sunday’s victory over the Rams was huge literally and figuratively as the Vikes move forward with a head-to-head tiebreaker advantage over both L.A. and New Orleans.

3. New Orleans Saints (8-2): NFC North leader. They extended their winning streak to eight by the slimmest of margins. Next week’s game against the Rams in Los Angeles could have weighty seeding ramifications for both teams.

4. Los Angeles Rams (7-3): NFC West leader. One of the league’s promising young teams just got a huge wake-up call and will wake up in second place Tuesday morning if Seattle wins Monday night.

5. Carolina Panthers (7-3): Wild card No. 1. Can’t overlook the Jets this week if they want Week 13’s game at New Orleans to potentially be for NFC South lead.

6. Seattle Seahawks (6-3): Wild card No. 2. Beat the Falcons tonight, and they jump up to the fourth spot. A loss would create a three-way tie with Atlanta and Detroit for the conference’s final playoff slot.

1. Pittsburgh Steelers (8-2): AFC North leader. Their 6-1 conference record currently confers the tie-breaking edge, but everyone expects the Steelers and Patriots to settle the AFC’s battle for home-field advantage on the field in Week 15.

2. New England Patriots (8-2): AFC East leader. They’re cruising, as usual at this point of the season. They come home next week to host the Dolphins, then have to navigate three more consecutive road games, culminating with that Dec. 17 date at Pittsburgh.

4. Kansas City Chiefs (6-4): AFC West leader. Ugly loss Sunday to a brutal Giants team. But the Chiefs are fortunate to be in a shockingly terrible division, maintaining a two-game edge despite dropping four of five.

6. Baltimore Ravens (5-5): Wild card No. 2. And you thought this team was nevermore. A half-game edge in AFC games gives them this spot over Buffalo for now. But given the way the spiraling Bills are playing and Baltimore’s generally soft schedule, advantage Ravens. However it’s worth noting several 4-6 teams (Jets, Dolphins, Bengals, Texans, Raiders, Chargers) are just a mini hot streak away from entering the fray.