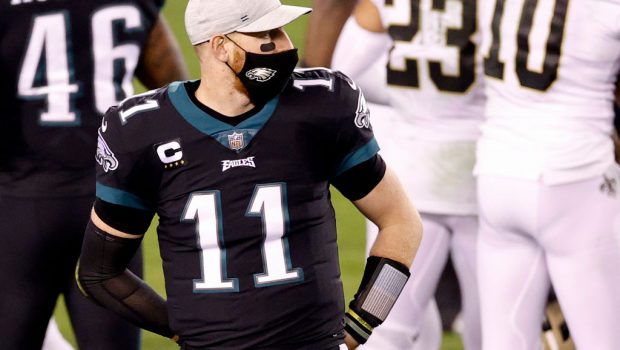 WHINY WENTZ IS WEARING OUT HIS WELCOME WITH EAGLES FANS!

New Eagles QB Jalen Hurts came one miracle Hail Mary catch on the game’s last play from beating the Arizona Cardinals. But the pass fell short, ensuring another loss, 33-26 to the Cards, a sure playoff team.

Still the shaky offensive line and leaky secondary continue to plague this football club as the number of games left dwindles to a precious two.

The other QB, Carson Wentz, has let it be known he’s not interested in being a back-up next year. Guess what Carson, Eagles fans don’t want a starting QB who goes 3-8-1 before being pulled for Jalen Hurts a few weeks back.

ESPN analyst Dan Orlovsky has already stated this week: “Carson Wentz won’t take another snap for the Eagles.” Could be, but that hasn’t really been determined yet.

Wentz isn’t helping himself out in Philly where whiny players get discarded quick for reckless play and talk.

This season has been a disaster by any measure, but the Birds still have a slim chance to make the playoffs, with some help. They travel next to Dallas, Sunday, December 27 to take on the Cowboys in a must win game, 4:25pm/Fox