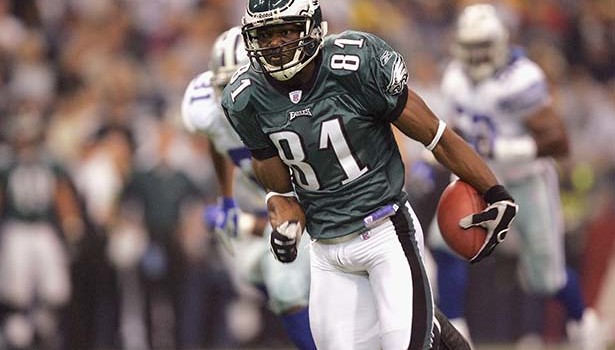 Terrell Owens (above), who only played a year and a half with the Eagles but was a big reason they made the 2005 Super Bowl, is on the Pro Football Hall of Fame ballot.

And so is Eagle fave Brian Westbrook.

Owens played for five franchises, making All-Pro five times. T.O. led the league in TD receptions three times, retiring with 153, and perhaps in feuds with his quarterbacks, many of whom he felt didn’t target him enough.

Westbrook finished his nine-year career with the Eagles with 5,995 yards (third-most in team history), 37 touchdowns (fourth-most) and 4.58 yards per carry (fourth-most). The Villanova alumnus was a huge favorite with the fans.

Owens, one of the league’s most prolific and dynamic receivers for most of his 15 pro seasons, and Alan Faneca, an elite blocker who made six All-Pro teams at guard in his 13 seasons, are on the ballot along with:

Brett Favre, the NFL’s career leader in nearly every passing category when he retired after the 2010 season and winner of the 1997 Super Bowl with Green Bay.

The nominees consist of 93 players — 51 on offense, 33 on defense, nine from special teams — and 15 coaches. They will be trimmed to 25 semifinalists in November and, from there, to 15 finalists in January.

Voting will culminate Feb. 6, the night before the Super Bowl. While there is no set number for any class of enshrinees, the selection process bylaws provide that between four and eight new members will be selected.

Favre, of course, is the headliner. A three-time league MVP, he retired with 508 touchdown passes, 71,838 yards and 186 victories. Of course, he temporarily retired twice late in his career and finished up with Minnesota for two seasons following 16 in Green Bay and one with the Jets. He spent his rookie season as a backup in Atlanta before being dealt to the Packers, where he helped revitalize the franchise.

Owens played for five franchises, making All-Pro five times. T.O. led the league in TD receptions three times, retiring with 153, and perhaps in feuds with his quarterbacks, many of whom he felt didn’t target him enough.