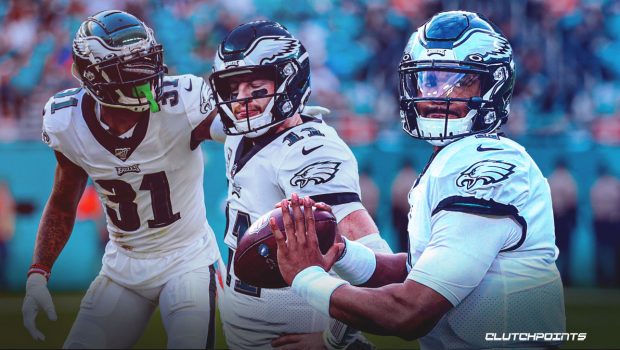 DOES WENTZ WANT OUT OF PHILLY? UNCLEAR FROM ‘CLARIFICATION’!

ESPN’s Adam Schefter appeared on the Fanatic yesterday, and attempted to clarify his report that Eagles QB Carson Wentz wanted out of Philly if he couldn’t be the starter.

He thinks it was blown it out of proportion:

“A lot of people have completely taken this out of context and misconstrued it. Let’s be very clear about the story, and we can go paragraph by paragraph – there is nothing in this story that is incorrect. Zero. It is all 100% accurate. There are people stretching it into certain things. Number one, Carson Wentz has been a good teammate. He’s been supportive. He hasn’t publicly pouted. He hasn’t done any of that. But the fact remains, as I wrote, he’s not interested in being a backup quarterback and would want to move on from the Eagles if the current situation (continued). That’s a fact. He doesn’t want to be a backup. He hasn’t complained about it publicly. My job is to talk to people. Carson Wentz didn’t tell this to me. His agents didn’t tell this to me.”

“This is all common sense. (Wentz) is not happy that he’s playing backup. He’s playing the good soldier. He’s being supportive. He’s not publicly complaining. But that doesn’t change the way of how he feels. He doesn’t want to be a backup quarterback. Who does? And if he wanted to be a backup you’d question the mental makeup of the man himself. So again, that was the story. Somehow that got turned into, ‘Carson Wentz is selfish, how can he speak out before the game?’”