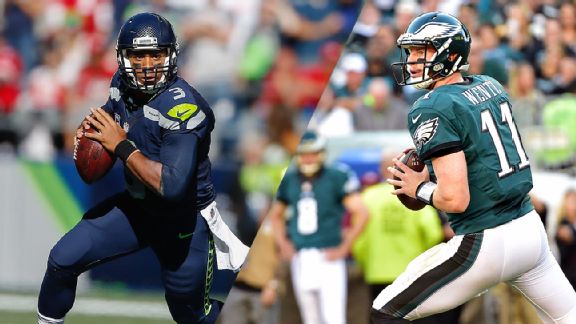 EAGLES’ WENTZ, SEAHAWKS’ WILSON BLOW SMOKE AT EACH OTHER!

When Carson Wentz and the Eagles visit Russell Wilson’s Seahawks tomorrow, it will be a meeting of a mutual admiration society.

Wentz told reporters this week that he’s “always been a big fan” of Wilson, while the Seahawks quarterback came right back with compliments for the Eagles rookie signal-caller.

“I’ve been fortunate to watch Carson this past year and see a few of his games and he’s playing great football and he’s going to be a great football player for a long time,” Wilson said, per CSN Philly.

“He’s athletic, he can make all the throws, he’s a smart guy, he’s competitive. I have a lot of respect for him,” Wilson added. “He’s a great football player. You guys have a good one in him.”

Sunday will mark Wilson’s 73rd career start. He’s won a Super Bowl along the way and reversed the concept that a passer of shorter stature is dead meat in the NFL.

Making just his 10th start, Wentz brings all the size and physical tools you could ask for. Wilson’s kind words don’t ring as hyperbole. These are two young quarterbacks set to delight fans for years to come.