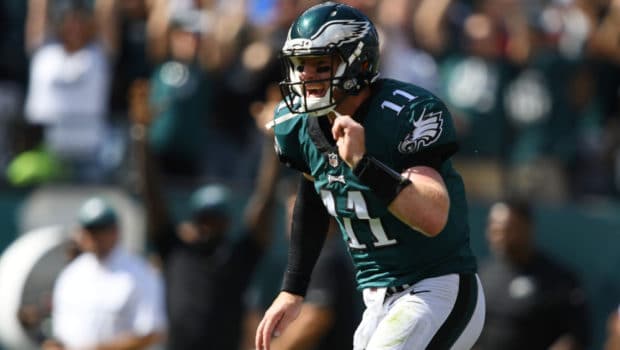 Pro Football Focus has named him their top rookie from Week 1.

Here’s what PFF had to say about Wentz:

There are obviously still some issues with his performance, yet Carson Wentz’s grade against the Browns is the highest passing grade we’ve assigned to a rookie quarterback in Week 1 since Cam Newton in 2011. The former North Dakota State standout recorded an adjusted completion percentage of 81.3 (fourth-best among QBs) and gained 68.7 percent of his yards through the air in what couldn’t have been a more encouraging start to an NFL career.

Wentz had the highest PFF passing grade for a rookie quarterback since Cam Newton came onto the scene. Two, his adjusted completion percentage was 81.3.

Adjusted completion percentage is basically adding up completions and drops, and dividing it by pass attempts minus anything that could’ve had an impact on a pass that was out of the quarterback’s control.

Spikes, throwaways, batted passes and passes disrupted by a quarterback hit are all subtracted from the quarterback’s pass attempts. PFF then divides that number by completions plus drops. The number that results from the entire equation is intended to be a more accurate completion percentage.