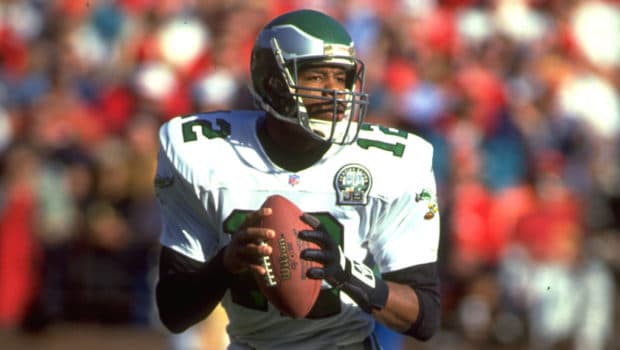 BEFORE THE EAGLES HAD CARSON WENTZ AND DONOVAN MCNABB, THERE WAS THE ULTIMATE WEAPON, RANDALL CUNNINGHAM!

Back in the late 1980s and early 1990s, when Carl Banks was one of the game’s best linebackers with the New York Giants and Cunningham was causing fits for opponents with the Eagles, the NFC East was the baddest division in professional sports. And whenever the Giants played the Eagles, Banks knew he would face the ultimate test in trying to contain Cunningham.

“When they would say he was ‘The Ultimate Weapon,’ he was truly the ultimate weapon,” said Banks, now an analyst on Giants radio broadcasts. “I don’t think there was ever a quarterback who was harder to prepare for, or gave defensive players individually more problems or more concerns before the game even started.

Banks had a starring role in the signature play of Cunningham’s career.

On Oct. 10, 1988, the Eagles hosted the Giants at Veterans Stadium. Two marquee teams. Divisional foes. Monday Night Football. For football fans, it was a must-see event.

Cunningham completed 31 of 41 passes for 369 yards and three touchdowns with no interceptions in a 24-13 victory. But it was his show-stopping move in the second quarter that left Banks and his teammates shaking their heads.

Trailing 3-0, the Eagles were at the Giants’ 5-yard line. Cunningham took the snap, rolled right and was pursued by Banks, who was among the best tacklers in the game. Banks hit Cunningham at the 10, yet Cunningham didn’t go down. Using his left hand to stabilize himself, Cunningham popped up and tossed a touchdown pass to tight end Jimmie Giles. Cunningham’s stunner capped a 12-play, 80-yard drive. Even today, Banks still can’t believe it.