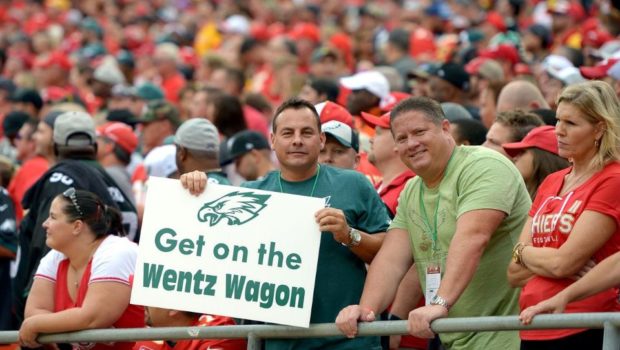 Eagles quarterback Carson Wentz completed 17 of 25 passes for 268 yards and four touchdowns during the Eagles’ victory over Washington on Monday night.

He added a career-high 63 yards on eight carries.

The 2016 second-overall pick now leads the NFL with 17 passing touchdowns and he trails only Alex Smith in fantasy points.

Wentz has reached 300 passing yards in three of seven games and has accounted for at least two scores in five of the outings. Wentz has also managed at least four carries in each game and at least six in five consecutive outings, which raises his fantasy floor.

The Eagles will score a larger share of their touchdowns on the ground moving forward (85 percent pass is fourth highest in the league), but Wentz’s high-end efficiency and mobility have him locked into the weekly QB1 mix.

He’s an elite fantasy play at home against the struggling 49ers defense this week.