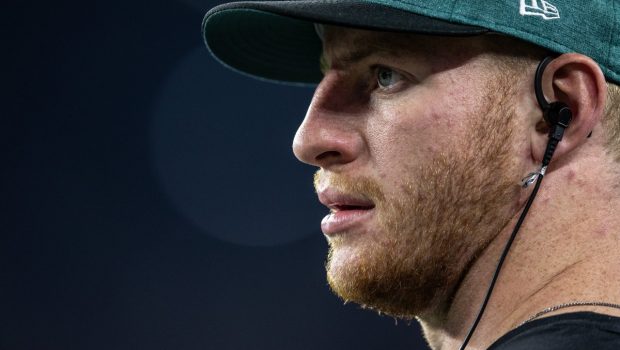 EAGLES WENTZ LOOKS GREAT, BUT WEEK 1 VS. FALCONS IS TARGET!

Eagles quarterback Carson Wentz is back to 11-on-11’s but still won’t be playing in Thursday night’s preseason game against the Browns in Cleveland.

Since starters usually don’t play in the fourth preseason game, the first chance to see Wentz will be Week 1 of the regular season on Sept. 6 at the Linc.

In practice, Wentz split first-team reps with Foles, at least for now. Wentz was re-evaluated over the weekend, and coach Doug Pederson was pleased with the feedback that he got.

“[I learned] quite a bit, actually,” Pederson said. “Just overall, his health, the strength of his knee, where he’s at physically. His arm is live. He hasn’t had all the reps, obviously, like Nick has had, like Nate [Sudfeld] has had. So his arm is live and he’s fresh. And that’s all things we wanted and where we kind of wanted him to be at this stage.”

Wentz is less than nine months removed from his surgery and Eagles tight end Zach Ertz is shocked with how quickly he has gotten to this point.

“It’s pretty remarkable how he’s progressed,” tight end Zach Ertz said. “You would never expect, just looking at him, that he would have had such a big surgery just eight and a half months ago. He looks great. He looks like he always does. He’s moving well — surprisingly well, honestly. I don’t know if anyone expected him to be this far along, but he looks really good.”