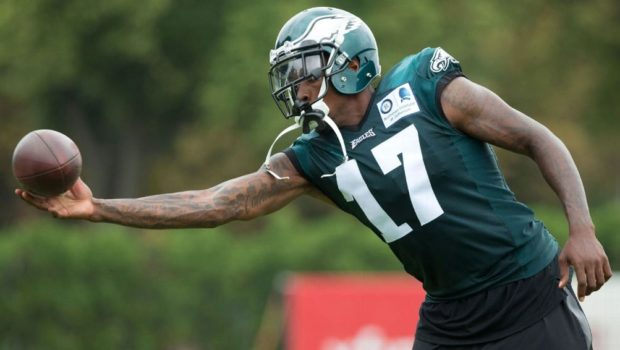 “Having a guy like that,” Wentz said this week, “it really makes a quarterback play a lot more confidently.”

Jeffery recently joined Wentz and a host of other skill-position players in Wentz’s home state of North Dakota to build on their foundation prior to the start of camp.

“He’s very soft-spoken but he’s a quiet competitor,” Wentz said. “He gets ticked off when he doesn’t make the play or different things, but he is quiet with it. What I really liked is just getting to know him on the field and getting used to the way he gets in and out of breaks and the way he can go up and get a ball. It’s been pretty cool getting to know him.”

The Eagles’ wide receivers combined for 1,849 yards last season, second-fewest in the NFL. Jeffery has had more than 1,400 yards in a single season alone. The ability is there; now it’s a matter of quarterback and receiver continuing to sync.

“It’s been great, from [spring practices], getting him to come up to Fargo and just talk through some things and go on the field and work out, and then out here on the field finally [at training camp], it seems like it’s been a long time coming,” said Wentz. “It’s just something that we’re going to continue to grow with.”