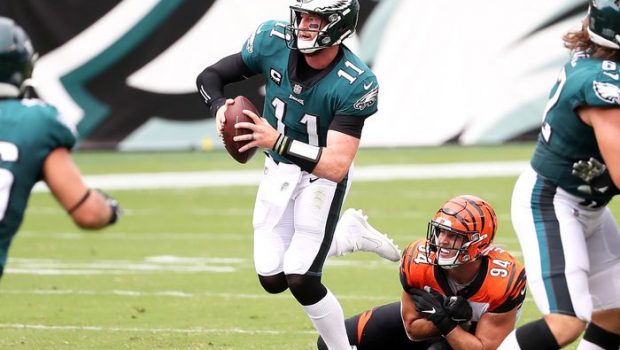 Facing an 0-3 start for the first time since 1999, Carson Wentz drove the Eagles 75 yards in the final three minutes. He barreled 9 yards on third-and-6 to the Bengals 19 and then ran in from 7 with a head-first dive into the end zone. Elliott’s extra point tied it with 21 seconds left.

Burrow, the Heisman Trophy winner and No. 1 overall pick, calmly picked apart the secondary in the second half, completing 31 of 44 for 312 yards. He’s still seeking his first win since leading LSU to the national championship in January.

“I’ve never tied in my life, so it feels strange for sure,” Bengals coach Zac Taylor said. ‘I know it sure as hell doesn’t feel like we won, that’s what I can tell you for sure.”

Wentz struggled again, tossing two more interceptions, before rallying the Eagles late. He finished 29 of 47 for 225 yards, one TD and ran for 65 yards and one score.

Wentz is so bad he makes the #Bengals defense look good 😂 #WHODEY pic.twitter.com/VPvSv39Vj2