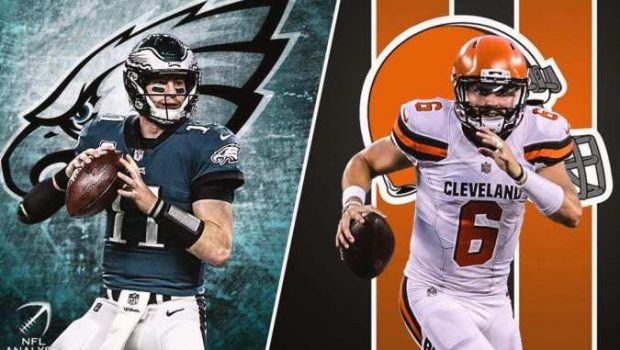 The Eagles are 2 1/2-point underdogs today at Cleveland, and they can win this game if:

Heading into Week 11, Browns quarterback Baker Mayfield’s 66.6 passing grade ranks 27th in the NFL out of 32 qualifying quarterbacks — one spot ahead of his opponent in this matchup, Carson Wentz.

The Browns are out to a 6-3 start to the season in spite of Mayfield’s play, not because of it. Part of that is due to having one of the most efficient ground games in the league and another part is that coach Kevin Stefanski has done well to mitigate some of Mayfield’s deficiencies through scheme.

The Eagles need to change that to get a much-needed win, and they have the ability to do so with the league’s highest-graded pass rush through 10 weeks. If they can limit the run game and get pressure on Mayfield in clear passing situations, it’s hard to see the Browns having a whole lot of success offensively.

These teams are closer than the current betting market sentiment, which has sided heavily with the Browns.

The Eagles are 12th in opponent-adjusted run-defense grades, and they could very well offer more resistance than the Browns have experienced on the ground in recent weeks. If the Browns are finally forced to pass, our predictive models project them to struggle with a depleted receiving corps at a time when the Eagles are finally healthy (for the most part). This could be a more valuable betting opportunity than people initially realize, as our models have a potential upset special brewing.

Operation Ground and Pound is a full-go in Cleveland. In Week 10, the Browns returned key pieces in their run game in PFF’s highest-graded run-blocker Wyatt Teller and running back Nick Chubb, who ranks No.1 in the league in yards after contact per attempt (4.41).

Chubb and counterpart Kareem Hunt rushed for over 200 yards, so fire them up with confidence even in a tougher matchup against the Eagles.

Because Philly boasts a strong run defense, Mayfield might have to take to the air more than usual, which bodes well for Jarvis Landry and Austin Hooper. The Eagles have allowed the third-most fantasy points to tight ends this season. Before his injury, Hooper led the team in targets Weeks 4-6 (24% target share).

The Cleveland tight end also leads the team in catches when Mayfield is under pressure, so look for the Browns’ quarterback to target his safety blanket against PFF’s highest-graded pass-rush unit. The Eagles have forced the most catches to TEs this season when pressuring the opposing quarterback.

Hooper led the team in routes run and Landry led in targets for the third-straight game last week.

The Eagles have only scored one touchdown by a receiver in the slot all season. Greg Ward has been the Eagles’ slot receiver, but his role has been decreasing as other Eagles receivers get healthy. Jalen Reagor has been playing more in the slot, so if there is a surprising play from this offense, it would be him.