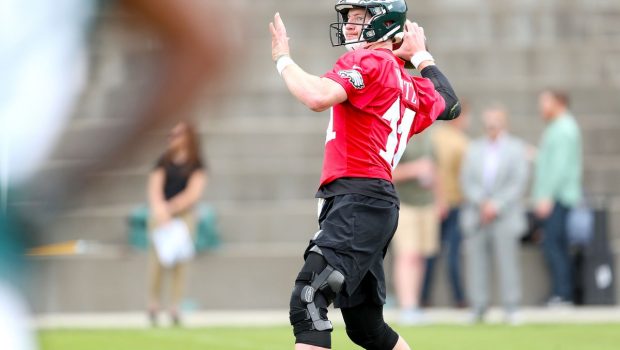 So, as we reported Saturday, Eagles quarterback Carson Wentz took part in 11-on-11 drills in yesterday’s practice.

Wentz had taken part in the 11-on-11 drills the first three days of training camp, from July 26-28. But the Eagles scaled back his workload after that, with coach Doug Pederson saying he saw enough from Wentz to know his rehab was going well. He also said he didn’t want to expose Wentz to any possible setbacks or incidental contact from defenders.

During the interim, Wentz did take part in individual drills and team 7-on-7 drills without any linemen present, or what Pederson referred to as a “more controlled environment.”

Pederson said one benefit of this plan is that Wentz is fresh heading into the final 2½ weeks before the season opener.

“His arm is live, he hasn’t had all the reps, obviously, that Nick (Foles) has had, that Nate (Sudfeld) has had,” Pederson said. “So his arm is live. He’s fresh, and that’s all the things that we wanted him to be at this stage.”

“We’re still in training camp,” Pederson said. “Normally, in the past, we would kind of do the same thing whether it was Carson/Nick or Nick/Carson. We’re still evaluating. This is all part of the process and the plan that we’ve established for Carson moving forward.”

Pederson seemed to suggest that Wentz won’t play in either of the two remaining preseason games. Wentz has yet to be cleared by the medical staff for contact. But Pederson also said he wants Wentz to have at least a week of full practice participation before putting him in a game situation.

But the Eagles have liked what they have seen from Wentz so far.

“He looks great,” Sudfeld said. “Just always had it mentally, always had it physically. He looks like the same old Carson Wentz.”

That was evident early in camp when Wentz was doing the team 11-on-11 drills. On July 28, the team was in full uniform and pads, and there was live contact (not on the quarterbacks). Still, there was one play where two linemen fell in front of Wentz, who had to step away and then sprint out of trouble.

Wentz sprinted out on a few other plays that day. After that, the Eagles scaled him back. Now, they’re building him back up.

Pederson insisted that is all part of the plan.

The team drills are no longer open to the media. Pederson admitted that some of that, along with keeping Wentz out of the preseason games, is part strategical so the Falcons don’t know exactly how to prepare for Wentz.

“It doesn’t hurt to not put it out there who’s going to start right away,” Pederson said.

But Pederson stressed that was not the main motivation.

“It’s big to evaluate him and see where he’s at, and get him back in there with the guys,” Pederson said. “Again, it’s still a slow process, but at the same time, it’s exciting for him and for us to get him back out there.”