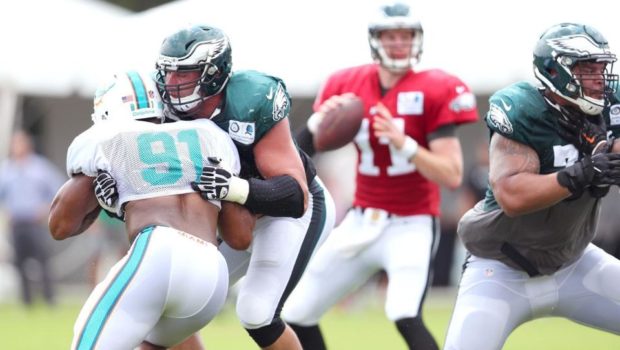 However, at yesterday’s practice with the Miami Dolphins, Kid Carson found the sweet spot!.

Wentz carved up the Fish, routinely finding big plays to both Jeffery and Smith. Among the day’s highlights were Smith’s two touchdowns against cornerback Byron Maxwell during 11-on-11 team drills.

“I think their chemistry is good,” Eagles offensive coordinator Frank Reich said. “Torrey is a pro. He works very hard. I think they’ve gotten a lot of reps together all through (organized team activities) and training camp. So not concerned about the production in the preseason game where he really hasn’t played that much. So feel very good about that.”

One of Smith’s scores on Maxwell came in the red zone. After Wentz took the shotgun snap, he bounced around in the pocket long enough to allow Smith to reach the end zone, fake as if he was going to cut to the interior of the field and then shoot outside toward the sideline. Wentz then zipped a pass that Smith hauled in for the score.

The other touchdown came from about 25 yards out, and it appeared as if Maxwell was expecting safety help before Smith ran by him and caught Wentz’s pass.

The Birds’ first-team offense struggled Thursday in a 20-16 preseason victory against the Buffalo Bills, who acquired Jordan Matthews from the Eagles the previous week. Matthews led the team’s wide receivers last season with 73 catches for 804 yards.

In Thursday’s game, Jeffery drew five targets but caught only two passes for 23 yards. The former Chicago Bears standout has missed time with a shoulder injury, which prompted receivers coach Al Groh to say on Saturday that he was “a little bit behind.”

In yesterday’s practice, Wentz found Jeffery on a slant for a 20-yard touchdown grab, which also came against Maxwell.

After sighing a one-year, $14 million contract in March, Jeffery now looks on pace to handle the No. 1 role many expected him to fill upon his arrival.

“Alshon looked good,” Reich said. “We feel very positive about the progress that we’re making. This training camp, it’s a long grind. There are ups and downs. I thought today Alshon looked good, was a good step forward.”