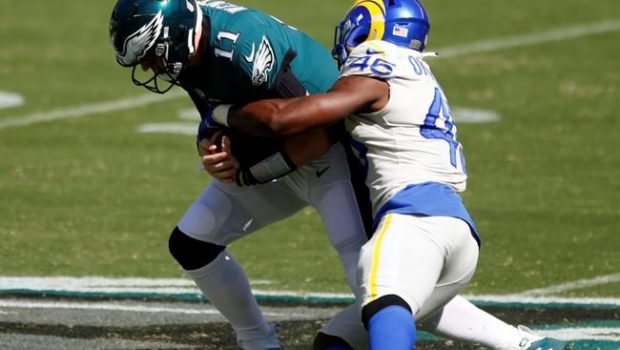 Eagles quarterback Carson Wentz has regressed and struggled, tossing multiple picks in consecutive games for the first time in his career.

Play-calling, inexperienced receivers and blocking in Week 1 have contributed to his inconsistency.

But coach Doug Pederson was critical of his franchise quarterback.

The Eagles and the Bengals have been plagued by injuries on the offensive line. For Cincinnati, Jonah Williams started at left tackle after missing his rookie season with a shoulder injury and has struggled at times. Right guard Xavier Su’a-Filo went on injured reserve after suffering an ankle injury in the opener. The lack of cohesion has left Burrow under steady pressure and left little room for Joe Mixon to run. Against the Browns, he was limited to 46 yards on 16 carries.

“We want to be more efficient in the run,” center Trey Hopkins said. “The way our games have gone, we’ve not always been in position to run the ball in some instances. In some instances we weren’t very efficient at all. We weren’t good enough. We weren’t playing up to our standards.”