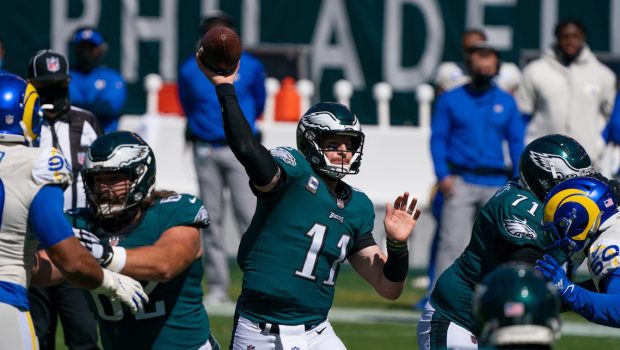 EAGLES WENTZ DESERVED THE BOOING HE GOT – EVEN IF IT WAS FAKE!

Because of the coronavirus pandemic, there were no fans at Lincoln Financial Field yesterday.

But there was booing.

With attendance restrictions throughout the league, the NFL has provided recorded crowd sounds to be played over the public-address system during games.

The fake crowd is supposed to be reactive to the game, and the crew running the system in Philly kept it true to life as good plays for the Rams brought out the boo birds and bad plays by the Eagles got the boo button pushed, too.

The Rams defeated the Eagles 37-19, so there was some booing associated with the game, particularly for the play of Eagles quarterback Carson Wentz.

Wentz completed 26-of-43 passes for 242 yards with no touchdowns and two interceptions and had 7 yards and one touchdown on two rushing attempts as Philadelphia fell to 0-2 for the 2020 season.

Wentz’s first interception came on the Eagles’ first possession of the second half with Philadelphia trailing 21-16. He was picked off in the end zone by Darious Williams.