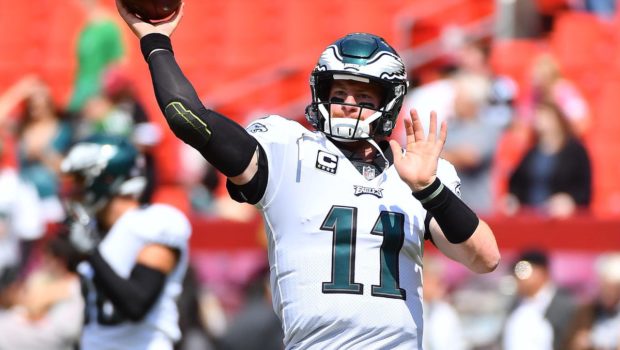 EAGLES’ WENTZ AHEAD OF BRADY IN NFL MVP RACE!

1. QB Carson Wentz, EAGLES (35 points): The Eagles were off last weekend, but Wentz remains our unanimous MVP selection for the second straight week. His 23 TD passes are still four more than any other passer in the league, and no one else has eight wins on their resume this year. A 104.1 QB rating is tops in the NFC. But Wentz’s candidacy will face serious tests with matchups against Dallas, Chicago, Seattle and the L.A. Rams over the next four weeks. Last week: 1

2. QB Tom Brady, New England Patriots (15 points): He’s not exactly running an Air Raid offense, but the Patriots’ reliance on short and intermediate passes has Brady chucking the ball constantly. He paces the NFL in completions (231), attempts (343) and yards (2,807), and only Wentz has more TDs than Brady’s 19. But let’s hope the 40-year-old two-time MVP doesn’t suffer jet lag (or altitude sickness) with the Pats headed from Colorado to Mexico City and in the midst of playing five of six on the road.Last week: 2

3. QB Alex Smith, Kansas City Chiefs (5 points): The league leader in passing efficiency (113.9) and owner of a gaudy 18-to-1 TD-to-INT ratio, Smith has a golden opportunity to get back into the race with K.C. likely to be favored to win all seven of its remaining games. Last week: 3

T4. RB Todd Gurley, Los Angeles Rams (3 points): The league leader in yards from scrimmage (1,160) and TDs (10), he’s the focal point of L.A.’s top-ranked scoring offense and will be a prime candidate for offensive player of the year even if he doesn’t move up the MVP rankings. Last week: 4

T4. QB Russell Wilson, Seattle Seahawks (3 points): He’s once again a one-man band on offense, even leading the ‘Hawks with 290 rushing yards. Wilson’s 2,543 passing yards trail only Brady, and his 19 TD passes place him right behind Wentz. And given Seattle’s injury issues, he may have to turn in a dynamic second half to make his sixth consecutive playoff trip. Last week: Unranked