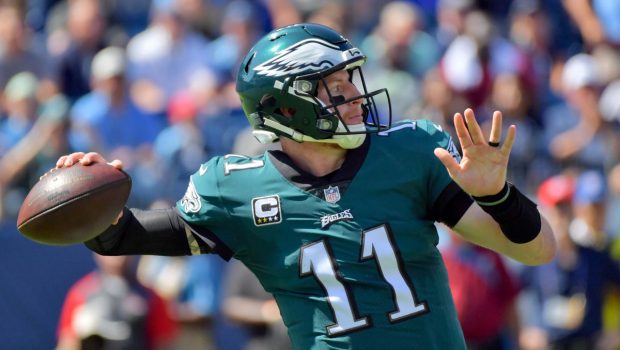 “We’ll have to watch the tape, especially this week, but I think overall we’re just hurting ourselves too much,” Eagles quarterback Carson Wentz said after yesterday’s 26-23 loss at Tennessee. “I think it’s something little here, here and there, and those little things just add up. At the end of the day, I’m not too worried. It’s a frustrating one but it’s one we can learn from and bounce back from.”

Wentz was being politically correct after he had to get off the mat countless times to lead the Birds to within range of the Titans yesterday.

Wentz completed 33 of 50 passes for 348 yards and two touchdowns with no interceptions and one fumble.

A handful of Wentz’s passes were dropped in key situations. After the game, head coach Doug Pederson accounted it to a lack of focus at times.

“Guys make mistakes,” Wentz said. “I miss throws, guys drop balls, O-line missed blocks, it’s part of the game. Obviously, it’s something we need to clean up for all of us but I’m not worried about it.”

Wentz was sacked four times, hit 11 times, and had one fumble recovered by the Titans. Wentz said the offense knew that Tennessee would bring the heat all game. He wasn’t willing to pass the blame on to his teammates.

“It’s part of the game,” Wentz said. “I’ll look at the film and see. Obviously, there are times where I hold the ball too long and there’s miscommunications, some protections we didn’t get called right, but at the end of the day, we’ve got to watch the film and regroup on that.”

“Give them credit, it’s a pretty good front,” Pederson said. “We knew that going in. It’s a good defense so I give them a lot of credit. We’ll look at the film and make our corrections. We pride ourselves on picking up the blitz and we’ll get back to that.”

Wentz connected with Alshon Jeffery eight times against the Titans as the big-bodied receiver gained 105 yards and had one touchdown.

Missed opportunities defined the loss to the Titans. There are plays in the red zone Wentz would want back and he will need more protection going forward. But Wentz has confidence in his teammates and believes they can learn from the loss.

“We just need to regroup,” Wentz said. “We’re a quarter of the way through, 2-2, obviously not quite where we want to be, but we’ve got a long way to go yet. We’ve just got to keep staying together and there’s a lot of things we need to clean up, we need to clean up some things and finish drives as an offense.”