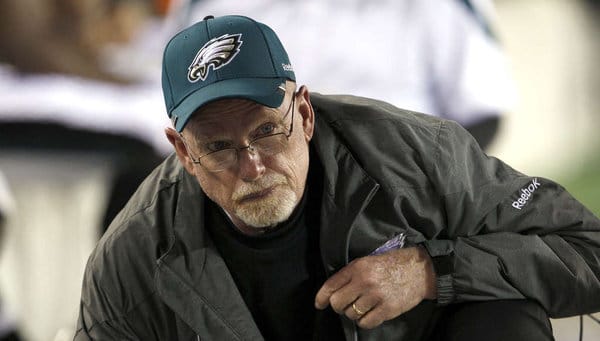 EAGLES WASHOUT D-LINE BOSS WASHBURN: I WAS THE ANTI-CHRIST!

Former Eagles defensive line coach Jim Washburn was fired with four games left in the 2012 season, and he has never forgotten!

In an interview on a Nashville radio station, Washburn said:

“I know the press didn’t care for me and one writer in particular,” Washburn said. “I was the anti-Christ in Philadelphia. So anyway I got fired with four games to go and that was a bitter pill for me to take. I was made out to be that way. They said stuff about me I never said. I don’t know. It’s neither here nor there. But anyhoo, I enjoyed my time up there. We almost beat Reggie White and Jerome Brown’s sack record. We missed it by a sack and a half the first year and then I don’t know. It was a strange situation up there.”

The Eagles held opponents to 324.9 yards per game (ranked eighth), 20.5 points per game (10th) and tied for the league lead with 50 sacks with the Minnesota Vikings.

“Well the first year we were eighth in total defense and led the league in sacks. After the second year … the whole thing started bad. Andy Reid’s son (Garrett), God bless him, O.D’d and died. It was tragic. It was awful. He was a great kid. After that it was a mess.”

The release of Jason Babin by the Eagles was one of the precursors to Washburn’s firing as well.

“Reid told me, he said ‘I hate him’,” Washburn said of the conversation regarding Babin. “Because he’d just run his mouth and stuff. I don’t know. I loved him. He’s like my guy.”

Washburn moved on and spent three years as a defensive line assistant with the Detroit Lions through 2015 and did some advising for the Miami Dolphins last year. However, he says he misses being around the game.