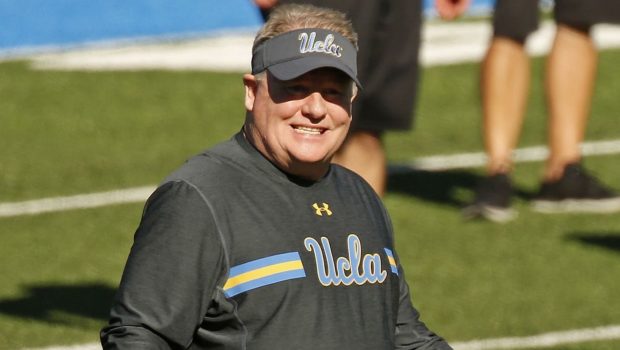 You just knew it wouldn’t take long for ex-Eagles coach Chip Kelly to piss people off at his new UCLA head coaching gig.

The father of UCLA starting quarterback Dorian Thompson-Robinson criticized Kelly in a series of tweets Sunday night, writing that the Bruins football coach is a “million dollar coach who bares [sic] no responsibility” for the team’s 0-3 start.

Michael Robinson on Sunday responded to two tweets from Bruin Report Online, the first of which noted that Dorian Thompson-Robinson struggled in Saturday’s loss to Fresno State but that the problems in UCLA’s passing game reflect a poor scheme.

“He is speaking on and about the factual,” Michael Robinson responded, using the Twitter handle @DoriansDAD. “It is all about the coaching, lousy coaching and play calling… Coaching that is so bad that it demands closed practices… Million dollar coach who bares no responsibility… Just random observations from a frustrated dad!”

After Bruin Report posted a GIF of Kelly confronting Thompson-Robinson after the freshman threw an interception, Michael Robinson responded, “Look, coach Kelly, if you wish to call him this is 4 and 26 for his last offensively called football games… Dorian has only played in 3 of the last 30 games… Can you say duped!”

Michael Robinson later responded to another tweet, writing that Kelly’s success at Oregon “was simply a fluke” that stemmed from him relying on other offensive playcallers.

UCLA is 0-3 for the first time since 1971 following a 38-14 loss to Fresno State on Saturday at the Rose Bowl. Thompson-Robinson, ESPN’s No. 2 dual-threat quarterback and No. 34 overall player in the 2018 recruiting class, has started the past two games after Wilton Speight suffered an injury early in the opener against Cincinnati. Thompson-Robinson has passed for 522 yards with 2 touchdowns and 2 interceptions in the first three games.