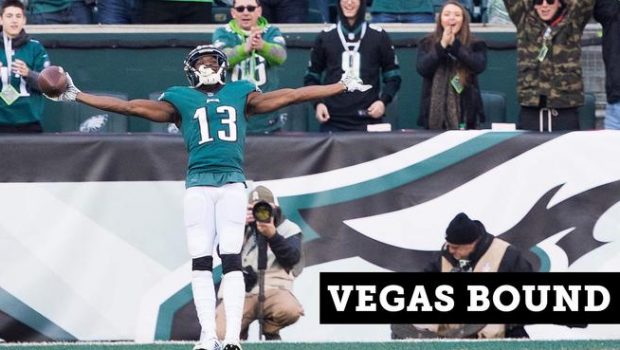 Raiders coach Jon Gruden is excited by the prospect of what wide receiver Nelson Agholor will bring to Las Vegas this season now that he’s out of the media cauldron that Philly represents.

Agholor was a frequent target of criticism during his time with the Eagles after being the 20th overall selection of the 2015 NFL Draft.

And that was because he often played like a fifth-rounder instead of a first-rounder!

Gruden believes that his new home in Las Vegas could be exactly what Agholor needs.

“He is a good player,” Gruden told Vic Tafur of TheAthletic.com.

“You can pick up the Philadelphia Inquirer and they will probably say something different, but this guy has caught over 200 passes, he is a young guy, he has played split end, flanker and in the slot. He caught eight or nine passes in a Super Bowl and won a Super Bowl. So he’s a world champion. He’s a great person … and he can return punts.

“I trust him and I think he was picked high in the draft for a reason. A change of scenery worked for Randall Cunningham, maybe it will work for him.”

Agholor never had more than 768 receiving yards in any of his five years with the team. He also struggled with drops at times as well. However, he’s had stretches of solid play too and had eight touchdowns in 2017 when the Eagles would go on to win the Super Bowl.

“I chose this relationship because he knows the game, and all I want to do is learn and be a better player,” Agholor said.