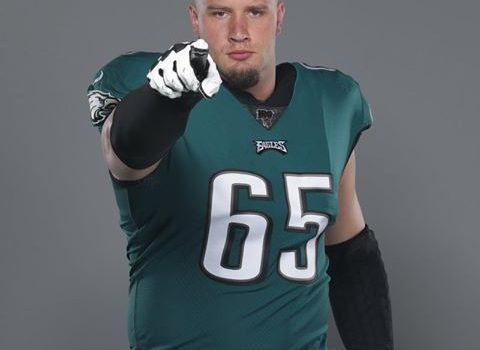 It’s actually a little surprising to see the Eagles rank this highly after their statistical struggles in 2018, when they ranked 19th in run blocking and 17th in pass protection, via Football Outsiders’ metrics.

They also allowed 40 sacks, which placed in the middle of the pack.

But it’s clear the Eagles have the talent to improve in 2019, from Jason Peters to Jason Kelce to Brandon Brooks to Lane Johnson (above).

Don’t forget about backup tackle Halapoulivaati Vaitai or rookie Andre Dillard, both of whom provide the Eagles with depth up front. This is one of the deepest groups in football.

The Steelers are bringing back four of five starters up front. Everyone except right tackle Marcus Gilbert, who was traded to Arizona, will be returning. That’s the good news. The bad news is that the Steelers lost respected offensive line coach Mike Munchak to the Broncos. Still, from a talent standpoint, the Steelers are loaded.

However, it is worth noting that from a statistical standpoint, the Steelers — like the Eagles — weren’t all that impressive as a run-blocking force in 2018. They finished 15th in run blocking, per Football Outsiders. That said, they were a dominant pass-blocking unit, checking at fourth while allowing only 24 sacks — the fourth-fewest in football.

The biggest concern is Munchak’s absence, but the Steelers are talented enough to overcome his departure.