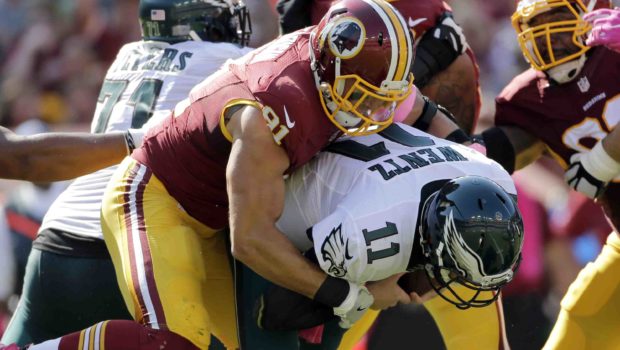 EAGLES VS. THE MYSTERIOUS REDSKINS IN FOUR DAYS!

The Eagles and the Redskins tee it up in four days in Washington, so let’s take a look at the Skins:

The line, coached by Bill Callahan, should be among the league’s best. Wide receiver Jamison Crowder is an excellent option in the slot, and with tight end Jordan Reed back after missing time with a toe injury, Kirk Cousins will have his best receiving weapon by the time the season begins.

If Pryor and Doctson can help this team overcome the losses of Jackson and Garcon, Washington should again feature a top-tier offense. Pair that with the franchise’s new blood on defense and you have the ingredients for a significant step forward. Losing nose tackle Phil Taylor to a season-ending quadriceps injury is a blow, especially considering the positive reports on the former first-rounder during training camp. But slotting former Alabama stars Jonathan Allen and Ryan Anderson into this defense could provide an immediate boost. The front office never could’ve imagined that Allen, one of the best players in college football last year, would have been available with the 17th overall pick. When he was, whoever makes these decisions for the Redskins had to be doing backflips.

There are worse ways to replace two excellent receivers than with Pryor and Doctson. But just because their names will fill Jackson and Garçon’s spots on the depth chart doesn’t mean they’ll have the same level of production. Jackson’s value was most apparent when he hauled in 60-yard touchdown passes, but the hidden benefits he provided to this offense were just as important. His speed forced defenses to tip their coverage early, and his field-stretching ability created an ocean of grass for players like Crowder and Reed to roam. Even if Pryor emerges as a star in his one-year, prove-it deal, this group will almost surely miss the dynamic that Jackson brought to the table.

Cousins has put up big numbers in Washington’s offense in the past two years, but he’s done so in some of the cushiest surroundings a quarterback could imagine. He’s had a varied, talented receiving corps, an excellent offensive line, and top-tier play-calling and design. If any of those factors falls off in 2017, we may see just how fragile the ecosystem of this offense— and Cousins’s ability to thrive in it—actually is. If Washington takes even a small step back on the offensive side of the ball—say, from fifth in DVOA to 12th—that might be enough to knock it from playoff contention, particularly given all of the team’s question marks on defense.