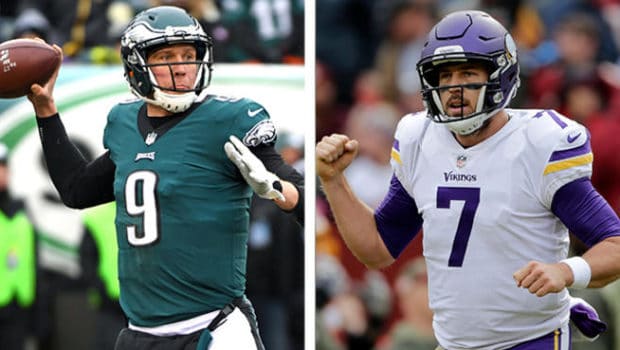 EAGLES-VIKES: THE ROADS LESS-TRAVELED TO THE LINC ON SUNDAY!

Former Eagles coach Chip Kelly gained control of personnel in 2015 and decided Foles was not the answer despite the quarterback’s 27-touchdown, two-interception performance in Kelly’s first year — 2013. His offensive coordinator, Shurmur, was a huge Bradford fan from their days together in St. Louis. His input helped convince Kelly to trade Foles to the Rams for Bradford.

On the same day as the Bradford-Foles trade in March 2015, the Rams acquired Keenum from the Houston Texans for a seventh-round pick. (Crazy, right?) Foles initially got the nod for the 2015 season, but he was benched in November in favor of Keenum. The Rams went 7-9.

3. Rams, Eagles move up for quarterbacks

Unsatisfied with their QB situations, the Rams and Eagles moved up to the top of the 2016 draft to select Jared Goff and Carson Wentz, respectively. Foles and Bradford quickly asked to be released/traded. Foles got his wish in the summer of ’16. Bradford had to wait a little longer.

The Eagles initially planned to have Wentz study under Bradford for a year, but they got an offer they couldn’t refuse right before the start of the ’16 season after Bridgewater went down with a bad knee injury. The Super Bowl-hopeful Vikings needed a QB. Their tight ends coach at the time? Shurmur, who’s now the team’s offensive coordinator. Bradford and Shurmur reunited after Minnesota sent a first-round draft pick in 2017 and conditional fourth-rounder in 2018 to Philly, just eight days before the start of the season.

5. Foles latches on with Chiefs, then Eagles

Foles reconnected with the coach that drafted him, Andy Reid, by signing with the Kansas City Chiefs in August 2016. Reid’s protege, Doug Pederson, had just taken over in Philly after a stint in K.C., bringing a similar offense to the Eagles. Foles’ familiarity with that system was a big reason the Eagles inked him to be Wentz’s backup last offseason.

6. Keenum moves on to Minnesota

Keenum hung on to the Rams’ starting job for nine weeks in ’16, but Goff eventually got the call and it was time for Keenum to move on. Keenum opted to sign a one-year deal with the Vikings this past offseason to back up Bradford.

Knee issues quickly derailed Bradford’s ’17 season. Keenum started 14 games for the Vikings in his stead, helping them to a 13-3 record. Foles took over in Philly when Wentz was lost to a torn ACL in Week 14. Even though he has been shaky at times, the Eagles have won all three games that Foles has started and finished, including a 15-10 divisional-round victory over the Atlanta Falcons to set up this matchup.