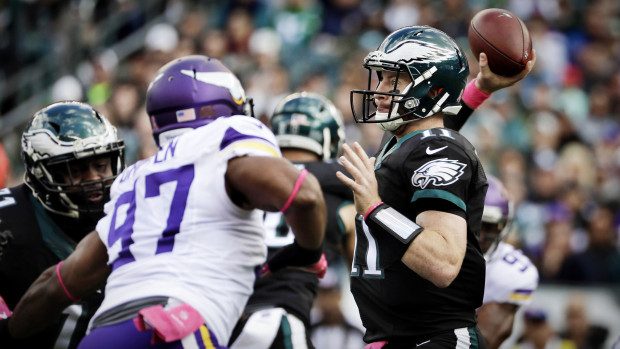 You can call it a rematch of last season’s NFC title game, but the main players in the Eagles-Vikes Sunday game had no role in that Birds’ 38-7 win.

The quarterbacks are different when the Eagles (2-2) host the Minnesota Vikings (1-2-1).

Nick Foles led the Eagles to a 38-7 win over Case Keenum and the Vikings last January. The Super Bowl MVP went back to the bench after Wentz returned from knee surgery in Week 3. Keenum went to Denver because the Vikings gave Cousins a fully guaranteed $84 million contract to be the face of their franchise.

Neither team is playing at a championship level right now and both are desperate for a win.

”They’re a great team, record aside,” Wentz said. ”We know we’ll get their best, obviously with the way it ended last year.”

Cousins had been successful against the Eagles in seven starts for Washington. He had thrown for 2,122 yards with 16 touchdowns and five interceptions while going 4-3 in those games.

”It’s a great environment, a great place to play an NFL football game on a Sunday afternoon. Great crowd,” Cousins said. ”I’ve had my fair share of battles there. Some have come out victorious, some have come out as the loser. It will be a great test for us.”