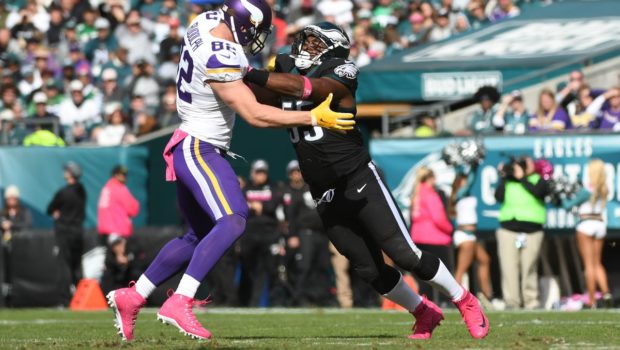 EAGLES-VIKES: HERE’S EVERYTHING YOU NEED TO KNOW!

The big game is only a day away, so let’s take a look at the NFC championship game tomorrow at the Linc:

VIKINGS AT A GLANCE

Defensive end Everson Griffen will get some extra attention from the Eagles. Philly left tackle Halapoulivaati Vaitai hasn’t been a liability replacing Jason Peters’ season-ending injury, but this is a tough matchup for him. Griffen had 13 sacks this season and is one of the best ends in the NFL. Griffen could disrupt the Eagles’ game plan, and if nothing else he could force the Eagles to make adjustments in their game plan to help Vaitai.

Why they’ll win: After Stefon Diggs’ miracle, are you picking against them? While it’s illogical to believe in things like “team of destiny,” if you do believe in such things then the Vikings seem like they’re the one. More relevant is their defense matching up against the Eagles. The Birds scored just one touchdown last week, on a fourth down. It averaged 3 yards per rush. The Eagles weren’t bad on offense last week but this is a much different challenge. The Vikings allowed the fewest yards and points in the NFL this regular season. The Eagles are going to struggle to move the ball.

Why they’ll lose: There’s a flip side to the unbelievable Stefon Diggs play, and it’s that it’s a heck of a high to come down from. The Vikings coaching staff has been great all season, but it needs to refocus the team immediately from one of the greatest plays in American sports this century. It’s also worth noting that the Vikings needed a once-in-forever play to beat the New Orleans Saints at home. It wasn’t all that fluky either — before Diggs’ play the Saints had outgained the Vikings and were in position to win despite losing the turnover battle on the road. If the Saints can almost beat the Vikings on the road, it’s not inconceivable the Eagles could beat them in Philly.

EAGLES AT A GLANCE

Key player: The Eagles spread the carries around many backs, butJay Ajayi is their most talented back and it wouldn’t be surprising if the Eagles ride him a little more than they have. Ajayi had 54 rushing yards on 15 carries and 44 receiving yards too, including a crucial 32-yard screen pass that was the Eagles’ longest play of the game. The Vikings are good against the pass and the run, but Ajayi might be the Eagles’ best shot to move the ball.

Why they’ll win: We focus on quarterback, but last Saturday was a good reminder that team efforts can win football games. The Eagles played very well against the Falcons, including Nick Foles. The coaches had a great plan, the offensive line was good, the backs ran hard and the defense frustrated the Falcons’ offense. The Eagles are a different team without Carson Wentz, but if we ignore a meaningless Week 17 game, they still haven’t lost without Wentz. The crowd will be great in Philly on Sunday night, and if the Eagles put together another full team effort (and Foles does his job again), they could go to the Super Bowl.

Why they’ll lose: In each of the Eagles’ past three games they have turned the ball over twice. For as great as Minnesota’s defense is, it surprisingly doesn’t force many turnovers. The Vikings were tied for 23rd in the NFL with 19 takeaways in the regular season. The Eagles can’t afford to turn the ball over. It’s already a good guess that the Eagles will have a hard time moving the ball against a fierce defense. Points will be at a premium. Philly can’t give anything away.

Keep in mind: Let’s ignore for a moment that Nick Foles played poorly in Week 16 with a “Monday Night Football” audience watching, then again in a quarter of a meaningless Week 17 game. Here are his stats from the other two-and-a-quarter games he has played since Carson Wentz went down: 53-for-78 (67.9 percent), 525 yards, five touchdowns, no interceptions, 108.1 rating. That’s not bad.