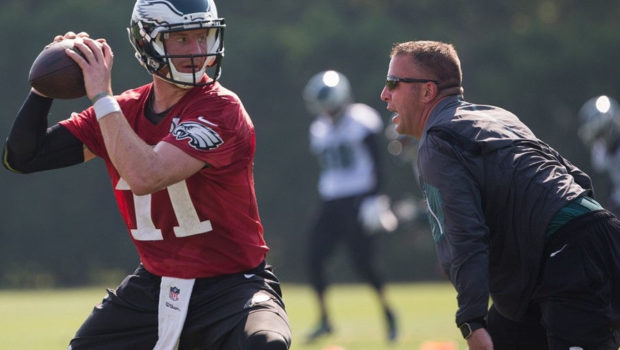 EAGLES-VIKES: ANOTHER TEST AGAINST A FORMER ASSISTANT COACH!

Now, on Sunday, he’ll be facing another former Eagles coach.

John DeFilippo (above) went from Eagles quarterbacks coach to Vikings offensive coordinator this offseason and Pederson was asked about the challenges that come with facing such an opponent.

“Going back to probably the same comments I had with going against Frank, some of the terminology, some of the calls, maybe hand signals, whatever it may be that he knows,” Pederson said yesterday.

“Listen, he’s a smart guy, but he’s also preparing his team to get ready to play. I think that’s where his focus is right now this week. But, yeah, having some familiarity obviously. We’re seeing some of the same things from their offense that we do, and so it’s good for our defense to see. Again, we’re aware of it. We’re not going to go in making a ton of — it’s a home game, so we can cut down on a lot of the signals, a lot of the verbiage, things like that at the line, and just try to go play.”

0 thoughts on “EAGLES-VIKES: ANOTHER TEST AGAINST A FORMER ASSISTANT COACH!”