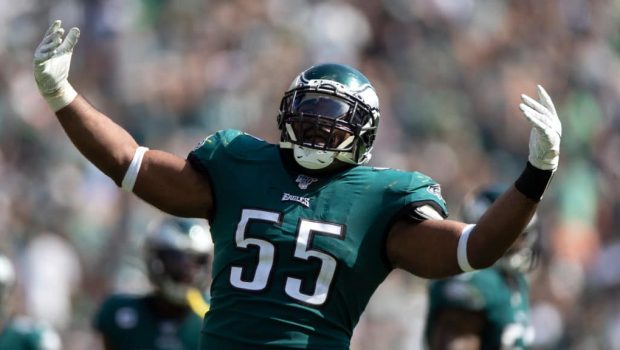 EAGLES VAUNTED PASS RUSH HAS BEEN A VIRTUAL NO-SHOW SO FAR!

Says Zach Berman on The Athletic:

Opposing quarterbacks have dropped back to pass 89 times against the Eagles this season, offering 89 opportunities for the defensive linemen to finish a play with a sack.

The team has only two sacks through the first two games. They don’t have a single sack from their four opening-day starters.

Sacks don’t tell the whole story about the effectiveness of a pass rush; pressure and quarterback hits are factors, too. But sacks are unquestioned negative plays that change a drive and sometimes a game. There’s no debating their impact. And the Eagles have recorded a sack on only 2.2 percent of opposing quarterbacks’ dropbacks, which ranks 31st in the NFL. The Eagles rank ninth with 14 quarterback hits, which supports the notion that they’re getting to the quarterback even if they’re not bringing down the passer.

“We see how many hits we have, but they’re not sacks, they’re not changing the field,” defensive end Brandon Graham said. “We love sacks, we want them. And we’re going to do everything we can to get them.”

Since Jim Schwartz became defensive coordinator in 2016, the Eagles have seldom gone back-to-back regular-season games without multiple sacks. There was a two-game stretch in Schwartz’s first year and a three-game stretch in 2017, but otherwise this has been one of the better teams at dropping the quarterback. (The Eagles were also limited to one sack in both the NFC championship game and Super Bowl in the 2017 postseason, but no one will complain about it.)

“NFL,” Schwartz said when asked about the lack of sack production. “I mean, the ball can come out.”