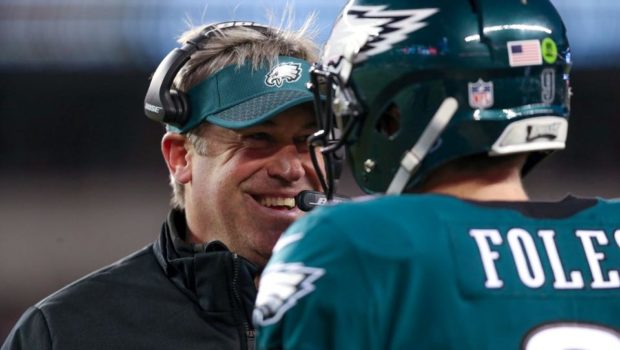 EAGLES UPSET THE EXPERTS AND FALCONS 15-10 TO HOST NFC TITLE GAME AT THE LINC NEXT SUNDAY!

The Eagles’ defense came up big in a last-minute goal-line stand and Jake Elliott banged home three field goals as the Eagles beat the Atlanta Falcons 15-10 to move into the NFC championship game on Sunday, Jan. 21, at the Linc.

Despite being underdogs as the No. 1 seed, the Eagles (14-3) showed plenty of moxie in the tightest spots of the fourth quarter.

They stopped sixth-seeded Atlanta (11-7) after it got to the 9 with a first down, and then on fourth down from the 2 when Matt Ryan’s pass sailed over Julio Jones’ head in the end zone.

It was the first playoff win for the Birds since the 2008 season, and they will host either Minnesota or New Orleans for the conference title next Sunday.

The Falcons, who so memorably blew a 28-3 second-half lead in last year’s Super Bowl, won’t get a chance to atone for that defeat.