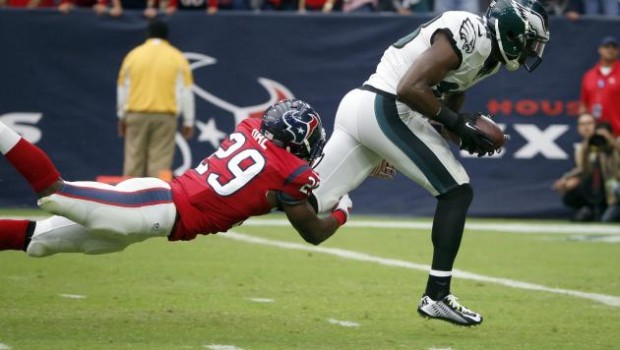 HOW THE EAGLES TURNED LEMONS INTO LEMONADE AGAINST HOUSTON

When Eagles QB Nick Foles got slammed into the turf by Texans LB Whitney Mercilus Sunday in the first quarter, it could have been curtains for the Eagles to win the game, as it is for most NFL teams when the backup comes in.

But not for the Chip Kelly’s Eagles.

The offense didn’t miss a beat. It can be argued it played better when Mark Sanchez entered the game. Kelly called a long pass play for Jeremy Maclin (photo above), who had another monster day with six receptions for 158 yards, including a 59-yard TD grab from Foles.

Having a No. 2 QB who can come in and produce what Sanchez did can’t be emphasized enough as a major advantage.

Another terrible break took place when LB DeMeco Ryans awkwardly ruptured his Achilles tendon, ending his season after picking off a pass. The injury might also end Ryans career as a linebacker with lots of miles left on the odometer.

Lost in the injuries shuffle was the return of All-World center Jason Kelce. Maybe it’s a coincidence, but the Birds went 3-for-3 in the red zone, all with Sanchez at QB. Better yet was the overall ground game production with McCoy getting 117, Sproles 17, and Chris Polk plowing for 50 yards, a touchdown, and a beast mode run, bowling over four Texans on their way to a 31-21 victory.

Currently at 6-2, the Eagles welcome in the Carolina Panthers on Monday Night Football, November 10 @ 8:30pm/ESPN.