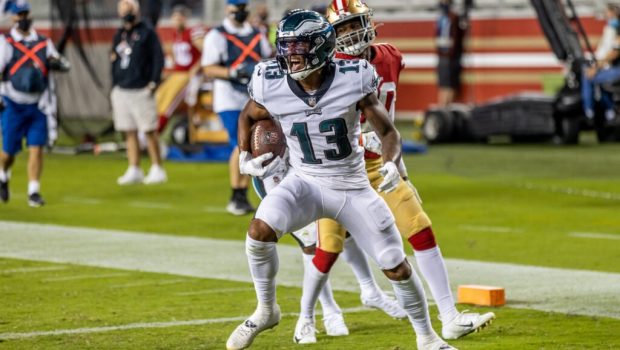 The Eagles Travis Fulgham has become a must-have wide receiver in fantasy.

He’s had at least nine targets and 70 yards in each of the last three games.

Even if one of the the Birds’ wide receivers is ready to come back from injury, the Eagles will likely ease either one back into action, so Fulgham’s targets should be safe.

With the Dallas Cowboys defense up next, Fulgham has a great opportunity to put up fantasy points.

The Cowboys’ combined PFF coverage grade on defense is a league-low 35.6.

Dallas has allowed a wide receiver to total at least 86 receiving yards in all seven games this year. Fulgham is the most likely player to see that sort of volume this week. The Cowboys have also allowed 12 touchdowns to wide receivers, so he could easily find the end zone, too.