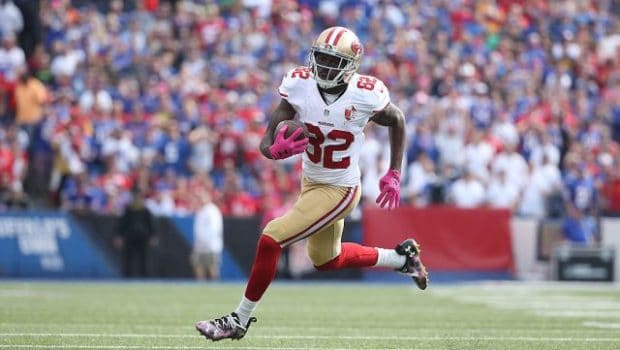 EAGLES’ TRADE FOR WR TORREY SMITH MAKES TOO MUCH SENSE FOR IT NOT TO HAPPEN!

The Eagles pursuit of Niners wide receiver Torrey Smith makes so much sense for both teams that it’s amazing the trade hasn’t happened already!

Smith can’t help the Niners because they don’t have a quarterback to get him the ball, and the speedster has just 13 catches for 199 yards this season. With San Francisco wallowing at 1-6, they don’t need the speedy wideout.

The Eagles have been a big surprise this season, thanks largely to the league’s biggest shocker: the play of rookie quarterback Carson Wentz.

While Wentz has a of solid receiver in Jordan Matthews, he doesn’t have anyone with Smith’s burners. Adding a guy with Smith’s wheels and game-breaking ability wouldn’t just give him a deep threat, it would also open up the short and intermediate routes for Nelson Agholor and Matthews.

Smith isn’t a great technical receiver, but defenses have to respect his speed, that will make everyone around him better.

The 49ers obviously need to add picks to fuel a massive rebuilding project. A fourth-rounder would help that movement.

The Eagles have an extra first-round pick in 2017 thanks to the Sam Bradford deal. They can afford to surrender a fourth-rounder for Smith.