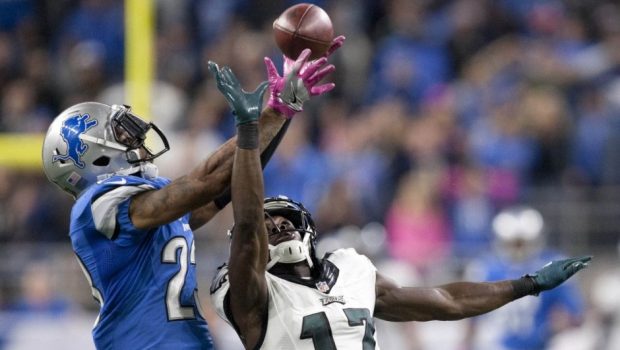 The Eagles finally got their star cornerback by making a deal for Slay, who signed a three-year, $50 million extension in the process. This is a big deal for a team that had typically gone cheap at cornerback during Howie Roseman’s second reign as general manager, but it’s not as enormous of a shift as we might have expected for a couple of reasons. This is on the lower end of what we might have expected for a Slay trade, both in terms of trade compensation and contract value.

While this isn’t exactly a DeAndre Hopkins-sized mistake from the Lions, it’s fair to say that the projected return for a Slay trade before free agency began was more than two mid-round picks. The Lions did get the Eagles’ original third-round selection (No. 85) instead of their third-round compensatory pick (No. 103), but when you consider that the Rams sent two first-round picks to the Jaguars for (the younger) Jalen Ramsey, it seemed fair to expect the Lions to get at least a second-round selection or a late first-round pick as the key highlight in a Slay package.

Likewise, the contract Slay is getting from the Eagles is toward the top end without really resetting the market. Slay responded to a tweet in January about cornerback deals in the $15 million range by saying the numbers were too low, but this deal comes in just above those contracts with an average annual salary of $16.7 million. With Slay reportedly taking home $30 million guaranteed as part of the deal, this appears to be a two-year, $30 million contract, which would be right in line with those figures.

While most Eagles fans are thrilled about adding a top-level cornerback after years of trying to get by with the likes of Ronald Darby and Sidney Jones in meaningful roles, there are likely a few who remember the disastrous Asomugha signing and worry that this could be a repeat. He had been brilliant during his time with the Raiders and shut down his side of the field to a virtually unprecedented extent, but after signing with the Eagles before his age-30 season, the three-time Pro Bowler seemed to lose it overnight. He lasted two years with the Eagles before being cut, and he was out of football a year later.

I wouldn’t be as concerned that Slay will disappoint. Asomugha was a great player, but the Eagles also took him out of the role he played in Oakland for stretches during his first year in Philly, and he never seemed to get his confidence back. Slay hasn’t been as dominant as the former Raiders cornerback, but he’s more versatile and certainly more comfortable moving around the formation to take No. 1 wideouts. Slay was equally comfortable on either side of the field in 2019: