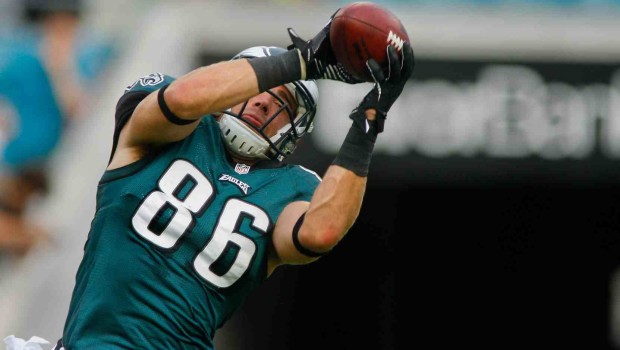 One of the mysteries of the Chip Kelly offense is why the Eagles three tight ends — Zach Ertz (photo above), James Casey and Brent Celek — aren’t more involved.

With wideouts like DeSean Jackson, Pierre Garcon, Andre Roberts, Jeremy Maclin and Jordan Matthews, it may be a bit difficult getting targets if you’re a tight end on the Redskins or Eagles.

Then again, the coaches and quarterbacks should be looking for their tight ends more often.

Riley Cooper and Matthews have been targeted over 80 times, and Maclin has a whopping 128 targets so far this season. For Washington, Paul is rather inexplicably fifth on the team in targets.

Also, notice how many 20+ yard plays each tight end accounts for relative to the number of catches they’ve made in 2014.

Ertz’s 20+ yard percentage is close to Gronkowski’s percentage, and Paul’s is better than the percentages of Jimmy Graham and Martellus Bennett.