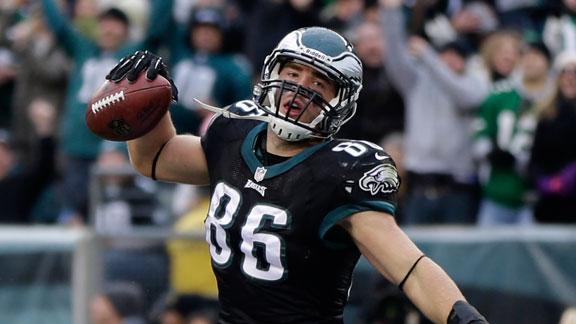 WITH TIGHT ENDS LIKE THESE, WHO NEEDS D-JAX? NOT THE EAGLES

Eagles fans were up in arms when Chip Kelly cut DeSean Jackson, the team’s best receiver in 2013, back in March.

And the reasons don’t really matter.

Maybe he was tired of D-Jax’s attitude, especially how he would berate his coaches on the sidelines — a real possibility.

Maybe he didn’t like his work ethic and tats.

But Kelly had a plan to replace Jackson’s offensive contribution:

When Kelly became coach in January 2013, he already had Brent Celek. And then the Birds signed James Casey to a free-agent contract and spent a second-round draft pick on Zach Ertz (photo above) during that first offseason.

While the position hasn’t been vital to the Birds’ offense, the beatdown of the Giants Sunday night showed how valuable tight ends have become in paving the way for All-Pro running back LeSean McCoy.

Then again, as Celek, Casey and Ertz showed the Giants on Sunday night, they can certainly beat opponents through the air as well.

The trio’s eight receptions for 118 yards accounted for nearly half of Nick Foles’ production through the air, while the unit pulled down both of the quarterback’s touchdown passes.

Ertz made a gorgeous diving grab on a 15-yard rainbow to come up with his second score of the season and seventh in his past 15 games—and with former Eagles cornerback Dominique Rodgers-Cromartie draped all over him.

Ertz helped open up the field on Foles’ second TD pass as well, dragging defenders on an underneath route while Casey slipped into the secondary. Normally called on to block, Casey surprised the defense, as the third-string tight end was wide open for six from 26 yards out.

It wasn’t the biggest of nights for Celek, but he did lead the group in receptions with four for 45 yards. He was also in pass protection on Casey’s touchdown.

That’s right. Three tight ends on the field at the same time.

Make no mistake, they have been integral to that phase, particularly Celek. Metrics site Pro Football Focus awarded Celek the second-highest cumulative run-blocking grade of any tight end in the NFL in 2013, which, not coincidentally, ended with McCoy leading the league in rushing.

Despite playing only 153 snaps last season, Casey was ranked 13th on the same list. While it’s not considered his forte, Ertz finished 25th.

The only negative is there aren’t enough snaps to go around.

Celek still maintains the lead in snap counts most weeks, largely due to his unique combination of blocking prowess and receiving skill. At 6’5”, 250 pounds with a reported 4.76 40-time, according toNFL.com, Ertz is the purest receiver of the bunch and can create mismatches against just about any defender—and is still improving. Casey has never emerged as a major threat in the passing attack but is arguably the best blocker of the three and contributes on special teams.

Between the three of them, the Eagles have every conceivable skill at the tight end position skill covered, and covered well. The combinations with other personnel or in multiple tight-end sets is nearly endless.

With 19 receptions for 306 yards and two touchdowns, Ertz is on the verge of a breakout season, those numbers putting the 23-year-old on pace for 60, 979 and six in 2014. Celek’s numbers are way down (10 REC, 75 YDS, 0 TD), yet that’s largely because injuries to the offensive line have required more work in the trenches. And Casey’s TD was just his second catch of the season, but the former Houston Texan is making his presence felt with a blocked punt and four special teams tackles.