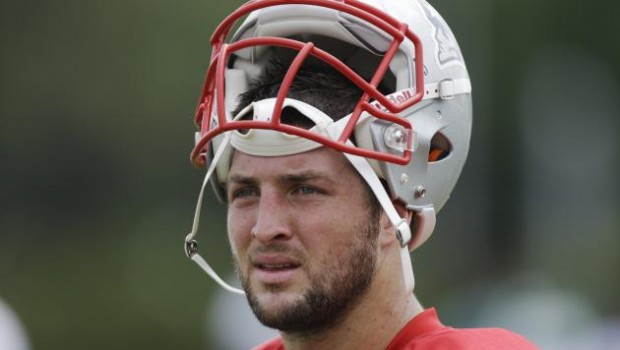 It is true that the Eagles’ signing of Tim Tebow has inspired the most extreme kind of paranoia in what passes for the mainstream media:

Eagles’ Supreme Leader Chip Kelly must be gay; why else would he sign a hunk-a-hunk-a like Tebow, who is still a virgin?

That was my favorite until yesterday, when the normally level-headed Mike Tanier of the Bleacher Report actually lent his name to this fantastical observation:

In nightmares, 20 years have passed, and Tim Tebow is still in the NFL. He is a Doug Flutie or George Blanda, and his appearance on the field causes reflexive spasms of purple-prosed ecstasy in old sportswriters.

By then, I am an old sportswriter, though there is no writing anymore, just instantaneous brain-to-brain podcasting. I take my grandchild off my knee, engage the auto-column-broadcasto-publisho-processor permanently implanted in my cerebral cortex and begin dictating directly to the world.

“Tim Tebow climbed from the bench and limped onto the field to the rapturous hosannas of an adoring Mexico City crowd. He accomplished in relief what rookie Camden Jack Cutler couldn’t provide as a starter: a victory that prompted alleluias from weary Bills fans. Tebow completed two passes for 11 yards and stumbled forward for six more yards to set up a 56-yard field goal by Lu Chen Zendejas. After the game, Tebow received a congratulatory phone call from President Watt.

The Bills’ next preseason game is against the Chargers in Mumbai.”