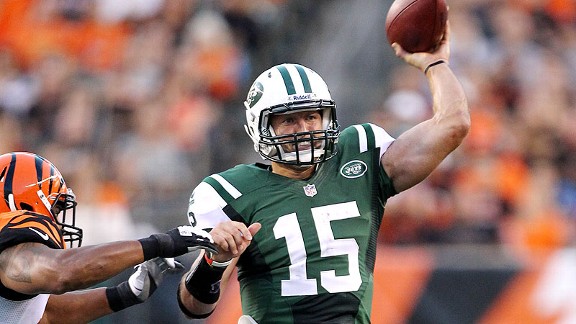 EAGLES TEBOW JERSEYS MAY NOT EVEN MAKE IT TO THE SHELVES

If you’re energized to go to any Modell’s in the Philly area to make your kid the first on the block with a Tim Tebow Eagles jersey, slow down there.

Mitch Modell isn’t getting caught up in the frenzy that resulted from the news that Tebow was soon to be signed by the Eagles.

The man who has made his living on betting big on the hottest stars arriving on the East Coast is waving the white flag this time.

“We’re not going to have a lot of Tebow jerseys,” Modell, who has 25 Modell’s Sporting Goods stores in the Philly area, told ESPN.com Sunday night.

That’s in stark contrast to Modell’s actions just three years ago. Within 24 hours of the New York Jets’ acquisition of Tebow in March 2012, Modell had thousands of T-shirts and jerseys in his New York and New Jersey stores, perfectly poised to strike while the iron was hot.

And that he did, as Tebow’s jersey became one of the hottest in the league.

But Tebow hardly played, and when the Jets cut ties with him a little over a year later, Modell was caught with a glut of merchandise that he had to almost beg consumers to take off his hands.

“We went down to $5,” said Modell, who serves as CEO of the company. “On some items, it hit $1. We were using them to start fires in the winter.”

Overall, Modell — who has about 150 stores in the Northeast, said he made money on Tebow as well as Jeremy Lin, who caught fire with the New York Knicks before leaving for the Houston Rockets — another situation in which Modell had to have a huge fire sale.