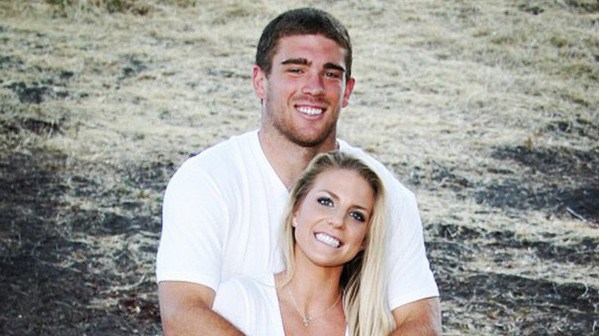 PHILLY-LOVING ZACH ERTZ WANTS TO BE ONE OF EAGLES’ GREATS!

“When people think of great tight ends in Philly, I want to be the guy that they think of,” said Ertz (above with World Cup star Julie Johnston). “I look at Brian Dawkins. I look at Brian Westbrook. I look at Donovan McNabb. These guys left lasting legacies in this city. Those are the guys that I want to be mentioned with.”

If there is a bigger fan of Philly and the city’s cool cultural uptick than the Eagles’ Connor Barwin, tight end Zach Ertz isn;t far behind.

In his three-year career, Ertz has 169 catches, 2,024 yards and nine scores. despite increasing his production steadily each season, Ertz says he’s continuing to set his sights even higher.

“I’m never going to be satisfied with where I am as a player,” Ertz explained yesterday after signing a new, five-year extension. “Whether that’s as a receiver or the blocking aspect, I’m going to continue to push myself to improve in each and every one of those aspects.

“The opportunity as well … I’m really excited to work with coach Pederson, a new mind and new voice. I have to be more consistent as well. Some of that falls on me and I’m going to work each and every day as hard as I can to get that done.”