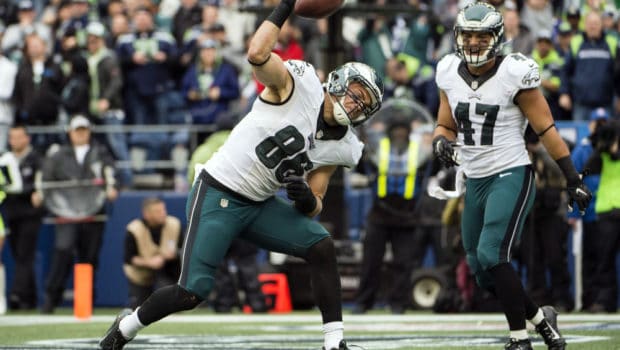 EAGLES TE ZACH ERTZ DUE FOR A FANTASY BREAKOUT YEAR!

The Eagles ranked first in targets and tied for third in red-zone targets among tight ends, which helped Ertz have his finest fantasy season.

In fact, he ranked fifth in targets (106), receptions (78) and receiving yards (816) to go along with a sixth-place finish in fantasy points at the position.

However, Ertz’s trend of not producing on a consistent basis until late in the season continued. A total of 51 percent of his receptions, 54 percent of his yards and 75 percent of his touchdown catches came over his last five games.

In his previous two seasons, 38 percent of Ertz’s targets and 44 percent of both his receptions and yardage came in his last four contests. Those are notable stats.