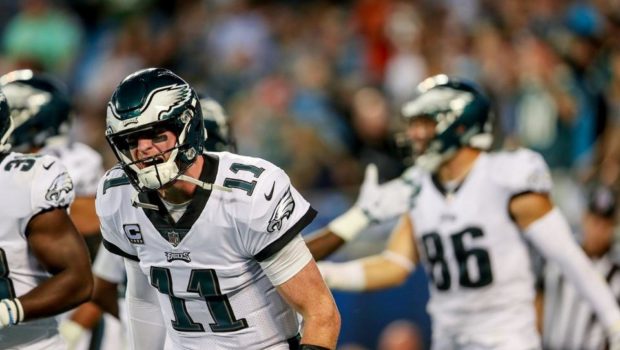 Look who’s setting atop the NFC!

Carson Wentz threw for 222 yards and three touchdowns as the Eagles beat the Carolina Panthers 28-23 to improve to an NFC-best 5-1.

The Eagles turned two interceptions deep in Carolina territory into 15 points, with touchdown passes to Zach Ertz, and LaGarrette Blount’s 2-point conversion to take an 18-10 lead in the third quarter. Wentz added a 24-yard scoring pass to Nelson Agholor in the fourth quarter

The first two interceptions came inside Carolina’s 20, but weren’t Newton’s fault. He was hit by Fletcher Cox as he released one pass, and running back Jonathan Stewart bobbled another pass resulting in a pick. Newton’s third interception — by Jalen Mills with 3:06 left — ended a chance for the go-ahead score.

Carolina had one last shot to win, but turned it over on downs at midfield.

Panthers middle linebacker Luke Kuechly was placed into the concussion protocol after his body crumpled following a collision with Eagles pulling guard Brandon Brooks. Kuechly missed nine games over the past two seasons with two concussions. All of the Eagles’ touchdowns came after Kuechly left the game late in the second quarter.

Newton gave the Panthers a 10-3 lead on his 51st career touchdown rushing in the second quarter. He kept the ball on a read option and juked cornerback Rasul Douglas on the 16-yard run.

Douglas get revenge on Carolina’s next possession, intercepting Newton’s pass after Cox crashed into Newton as he was throwing, causing the ball to float high into the air.