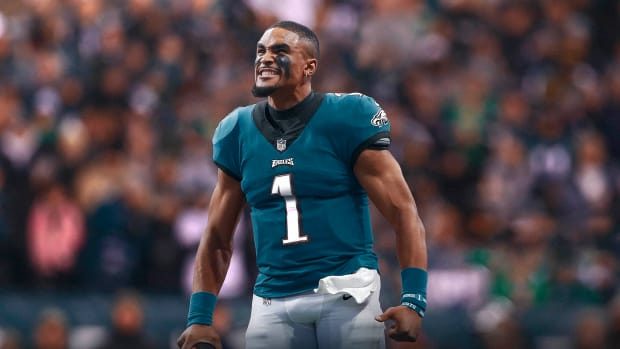 To call this a surprising draft pick doesn’t do justice to the word “surprising.”

The Eagles took Oklahoma quarterback Jalen Hurts in last night’s second round of the 2020 NFL draft with the 53rd overall pick.

“We have shown how we feel about Carson by our actions, by the amount of picks we put into him, and we showed it by the contract extension,” Roseman said. “We believe this is the guy to lead us to our next Super Bowl championship. But for better or worse, we are QB developers.

“When we make these kind of decisions, we always go to our principles and who we are and what we believe in, and right or wrong, this is who we are.”

Roseman said he called Wentz earlier to let him know that drafting Hurts was a possibility. He added that this move is “exciting for our quarterback. This is exciting for our football team. And these are the kind of decisions we are going to make, and we’re proud of it.”

Welcome to the best football city in America brotha!

“We think Carson is a phenomenal player, and nobody is going to be looking at a rookie quarterback as somebody who is going to be taking over for a Pro Bowl quarterback, a guy who has been on the cusp of winning an MVP,” Roseman said.

Hurts joins Wentz and Nate Sudfeld, who was recently re-signed to a one-year deal, in the QB room.

With Hurts’ selection, Oklahoma became the first team in the common draft era, which began in 1967, to have a quarterback taken in the first two rounds three years in a row, with Hurts joining Baker Mayfield and Kyler Murray.

Hurts indicated that he has not been told what his role will be initially, but coach Doug Pederson will certainly have the ability to get creative on offense. Hurts not only threw for 32 touchdowns last season but also ran for 20 TDs while racking up nearly 1,300 yards on the ground.

“He has a unique skill set,” Pederson said. “You see what Taysom Hill has done in New Orleans and how he and Drew Brees have a connection there and a bond there. And you look at [Joe] Flacco and Lamar [Jackson] in Baltimore for the short period of time, how they jelled together. It’s just something we’re going to explore.”

This is not a pick that came out of nowhere. Passing-game coordinator/quarterbacks coach Press Taylor went to Oklahoma’s pro day to scout Hurts prior to the coronavirus pandemic that put an end to team travel to evaluate players, and the team met with him at the NFL scouting combine.

“He’s part of the new guard of the mobile quarterbacks in the league that can win throwing it or running it. Just an uncanny toughness, poise and competitiveness,” vice president of player personnel Andy Weidl said. “A leader.”

Hurts will add another playmaking dynamic to the offense and could be a valuable safety net for Wentz. The question is whether that’s worth the inevitable noise this pick will bring.