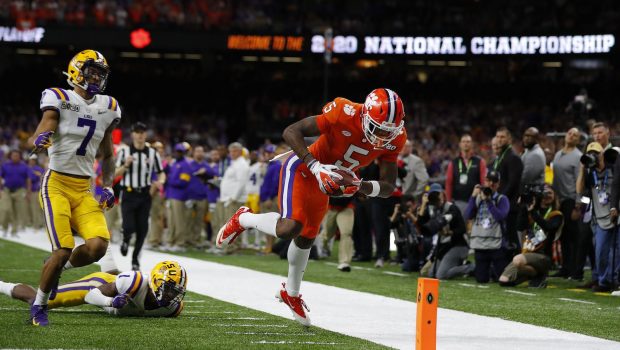 Higgins averaged 20 yards a catch and had 13 touchdowns last season. In the past two seasons, he has 25 touchdowns at Clemson and with the Eagles light at receiver, he could play huge early on.

Burrow is so accurate, and he enters the NFL with numerous NCAA records to his credit. No one will be happier with this selection than Cincinnati wide receiver AJ Green.

Despite missing two games last season, Young was amazing and still had 16.5 sacks. He is the dominant defensive player the Redskins have not had in numerous years.

Okudah is a shutdown corner who had three picks this past season. He also has a 41-inch vertical leap.

Simmons ran a 4.39 40-yard dash, the second-fastest time for a linebacker at the combine since 2006. This past season for the Tigers, he recorded 104 tackles, seven sacks, three interceptions and 16 tackles for a loss.

Miami needs a QB for the future and Tua seems to be their man. The only question is if the Fins trade up to make sure they get Tagovailoa. All reports show that he is 100 percent healthy and ready to do what he needs to do to be ready for the 2020 season.

With the Chargers not snatching up a QB in free agency (as of now, Tyrod Taylor is their starting QB) and the Dolphins looking at Tua, at No. 6 the Chargers keeping Herbert on the West Coast is the play.

This is a perfect pick for the Panthers, who need to replenish their defensive front.

Arizona needs to bolster its offensive line for Kyler Murray. Grabbing Thomas here can only help the trio of DeAndre Hopkins, Larry Fitzgerald and Christian Kirk (possibly the best trio in the NFL).

Jacksonville could go after a quarterback here, but the smart call is rebuilding an offensive line, especially because the team doesn’t have a lot of playmakers and isn’t very good.

Becton would be a nice complement to their free-agent offensive line pickup of Jack Conklin from the Titans. If the Browns grab Becton here, the excuses have to end for quarterback Baker Mayfield.

Wide receiver Robby Anderson has been the Jets’ leader the past couple of seasons but has left New York for Carolina. The Jets need a new receiver for Sam Darnold and Jeudy is exactly what they need.

Lamb averaged 21 yards per reception last year and over the past three seasons at Oklahoma he had 3,200 yards and 32 touchdowns.

We all know Ruggs ran the 40-yard dash in 4.27 at the combine. Kyle Shanahan’s offense needs a player like Ruggs since losing Emmanuel Sanders in free agency.

Tampa Bay needs to protect the GOAT (Tom Brady) and Wills seems to be their guy and he just so happens to be a southern guy.

Denver needs weapons on offense but needs to build up its offensive line and Jackson has plenty of potential.

The Falcons need help on defense and Blacklock is aggressive and extremely quick.

When Fulton went up against Jeudy, Ruggs and Tee Higgins (of Clemson) last year, they had a total of 11 targets for just three receptions and 39 total yards. Fulton is a shutdown corner and it is obvious from that statistic.

Jefferson had 111 receptions, 1,540 yards and 18 touchdowns last year. He also had nine catches in the championship game against Clemson, and in the semifinal game against Oklahoma he lit up the scoreboard with four touchdowns.

Henderson led the Gators in defended passes the past two seasons. Three seasons ago, he had four interceptions and took two of them back for touchdowns.

The Jaguars need help at cornerback and Diggs could start immediately.

It seems the Patriots are looking for a quarterback for the future and this might be their guy, especially since they didn’t dip into the free-agent QB pool. Love is getting plenty of “love” in draft talk despite tossing 17 picks last season after serving up only six in each of the previous two seasons. If any team can do wonders for a player at any position, it is the New England Patriots.

Queen is a king in the middle of the field and has great ability to cover tight ends or running backs. He had a great second half of the season and was everywhere in the championship game against Clemson.

A lot of mocks have D’Andre Swift being the first running back selected, but he was hurt at the end of the season and the facts can’t be denied on Taylor’s end. Taylor in three seasons had over 6,000 yards rushing and led the Badgers in rushing in every game but one.

Seattle needs a pass rusher like Chaisson. The Seahawks were 31st in the league with only 28 sacks last season.

He and newly acquired Calais Campbell can be quite the presence for the Ravens defensive line.

Jones is the perfect replacement for right tackle Jack Conklin.

Aiyuk averaged 18 yards a catch and had five games of 140-plus yards last campaign.

Murray is a tackling machine who has big-time speed and would be a steal if he slips this far down the line.

Swift can catch and has excellent quickness and would be a running back the Chiefs could count on for a long time.